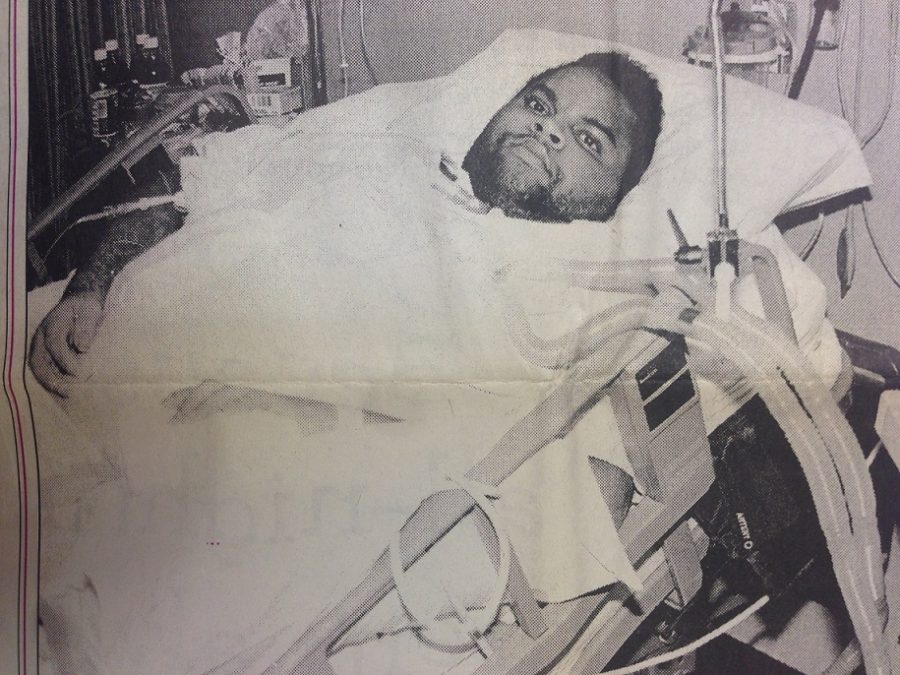 Roosevelt Dawson was a 20-year-old biology student at Oakland University. On Jan. 18, 1997, he began experiencing sharp pains. Then, he began to notice movement in his arms was slowing down and called an ambulance. He was picked up from his room in Van Wagoner Hall and transported to Pontiac Osteopathic Hospital.

He walked into the emergency room, but collapsed before reaching the door. He then lost use of his legs. Days later, he was diagnosed with a curable blood disorder, but this diagnosis was reversed after his first treatment.

Three months after his admittance to the hospital, he was left undiagnosed and paralyzed. Doctors knew from tests that it wasn’t spinal meningitis, a stroke, a heart attack or cancer. The cause was determined to be inflamed tissue in his upper neck, which also left him unable to breathe on his own.

His mother, Brenda Neal Dawson, said her son watched TV and listened to music to pass the time. The family passed blue bows out around campus as a way to raise money to keep the TV at the hospital on for her Dawson. In addition, the bows served as a symbol for the campus community to support a fellow student.

Over a year after he was first admitted to the hospital, Dawson decided to take his own life with the aid of Dr. Jack Kevorkian. At that time, Dawson was 21 and was the youngest person to seek assisted suicide from the infamous “Dr. Death.”

Lawyer Geoffrey Feiger represented both Kevorkian and Dawson, and said that the pair had spoken over the phone numerous times before Dawson’s death.

Dawson died with his mother by his side, according to a CBS article. His last words were “I love you” to his mother, repeated three times.

He was being treated in a Grand Rapids hospital before he left to end his own life. A psychiatrist tried to have him held in the hospital involuntarily, but that request was denied.

According to an article written by the National Right to Life, police came to Dawson’s home prior to his death to try and prevent his assisted suicide. The report said family would not allow police in until Kevorkian’s lawyers arrived on the scene. By then, Dawson was dead.

“There’s a slight solace in that he got to come home, got to be with his mother and got to die in peace,” Feiger said in an interview with the Associated Press.

“He should be remembered after the day of the service, not just today,” said Kevorkian, who attended the memorial service.

In addition to the memorial service held by the family, OU’s Association of Black Students held a candlelight vigil in his honor, where over 70 people came to show support.

Kevorkian himself passed away in 2011 after being admitted to Beaumont Hospital for kidney and respiratory problems.