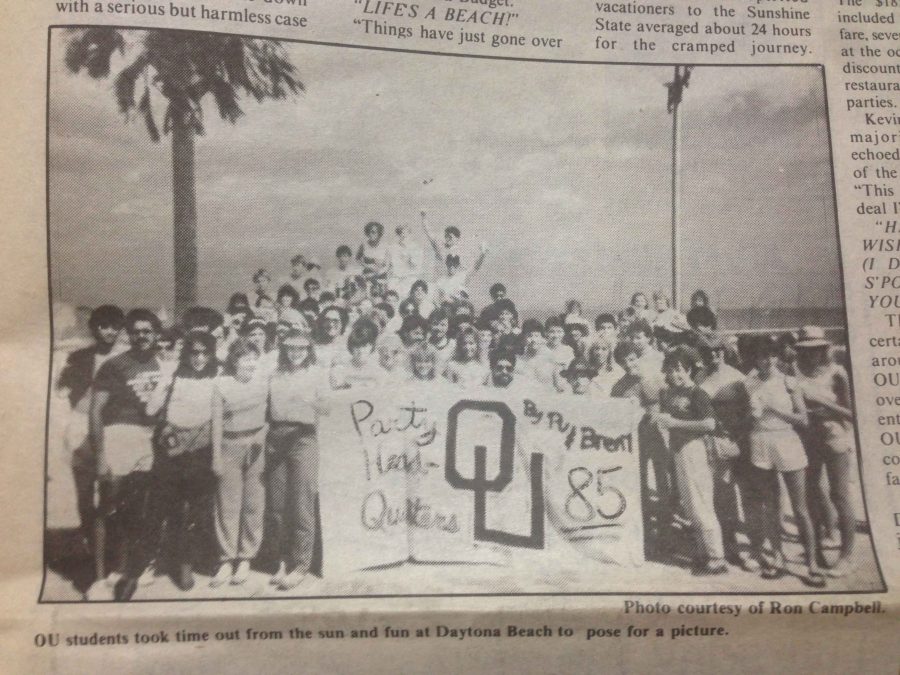 A group of OU students on the Daytona spring break trip in 1985. Just under 200 students total went.

Looking back: Spring break in Daytona Beach then and now

Gallery|2 Photos
A group of OU students on the Daytona spring break trip in 1985. Just under 200 students total went.

On New Year’s Eve, my grandpa and I went down to Main Street and the boardwalk in Daytona Beach, Florida. On our walk, we stopped by The Plaza hotel, where Oakland University students spent spring break in 1984.

My grandpa, Frank Freeland, was a lifeguard during high school and lived in Daytona during the peak of its tourism popularity. I had the chance to interview him about what it was like living there in high school, and what it’s like now, living there during his retirement.

Oakland Sail article from 1985 said “when a couple hundred winter- and homework-weary college students are put together in a party-happy resort hotel and hit with six of the most beautiful days they’ve seen in six months . . .”

The Plaza, which still remains on the beachfront in Daytona Beach, was one of the “classiest” hotels at the time, according to Freeland.

The Sail article said OU students hung a banner that said “Party head-quarters: OU” off the poolside balcony, enjoyed two of Daytona’s most popular bars and took part in a belly-flopping contest.

“What that doesn’t tell you is there were always kids jumping from those balconies into the pool,” Freeland said.

“Back then, all of the kids were partying,” he said. “They had to drink and eat, so they were spending money at all the local businesses.”

OU students weren’t the worst of the bunch, though. In The Sail’s article, the activities director for Echo Travel,(the company that OU went through to send the students away for the break) said the students were all “very well-behaved . . . they partied, but they didn’t get too rowdy.”

Until recent years, you could drive along a 35-mile stretch of Daytona Beach on the sand right by the water. Today, those driving lanes are completely sectioned off, leaving less beachside road for people to drive along.

In addition, laws regarding having alcohol on the beach are being enforced much more rigorously than they were back then, according to Freeland.

He said that spring break today isn’t nearly as loud as it was back when he was in high school.

“[During spring break] it was hard to negotiate coming to the beach to surf,” he said. “It wasn’t scary or anything, just not much fun to go to the beach with so many people.”

Today, Daytona Beach is only as crowded as Freeland saw it in high school during three weeks of the year: the week of the Daytona 500, Bike Week and Biketoberfest.

“Spring break is pretty quiet now,” Freeland said. “The only thing that could ever rival how busy it got during spring break was the Daytona 500 . . . College students took over the beachside. But no more.”