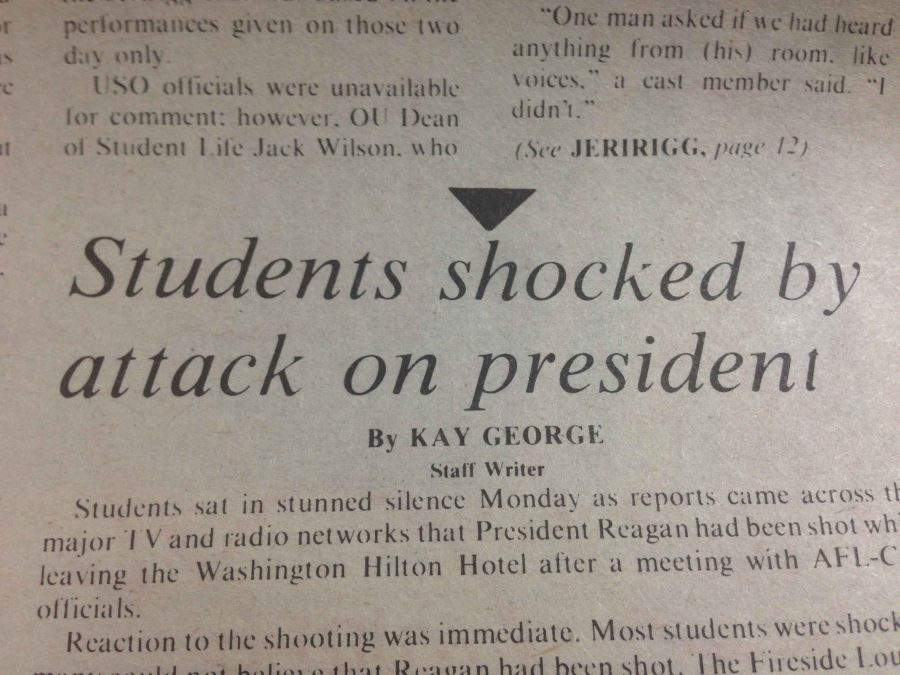 Looking back: Students in D.C. during assassination attempt

Monday, March 30, 1981. Sixty-nine days after Ronald Reagan was sworn into office. President Reagan was shot by John Hinckley Jr. outside the entrance to the Washington Hilton Hotel.

Hinckley was staying in the Park Central Hotel in Washington, D.C. Just a few rooms down from him was the cast of the OU play “Jeririgg”, as well as members of the OU mime ensemble.

“Jeririgg” was one of six college productions chosen nationally to open the American College Theatre Festival, and the play was set to go on a United Service Organizations (USO) tour to Europe over the summer. However, the European tour was canceled, apparently as a result of the assassination attempt.

The Observer, Oakland’s student newspaper at the time, reported that Fireside Lounge became the place where students and faculty gathered to figure out what was happening with the president. The article said students were “gathering wherever there was a television to watch.”

In the same article, The Observer said that many TV reports began shortly after the shooting took place, but it took a few hours until reports were completely accurate to the actual events of the shooting.

“I was very upset,” one student said. “We kept getting contradictory reports.”

Back in D.C., the cast of “Jeririgg” continued on to perform the night of the shooting. The two Monday performances and the Tuesday performance that they had already scheduled in D.C. were not cancelled.

“The audience and the performers were subdued,” Gary Devar, a member of the cast, told The Observer. “There was no laughter.”

The cast did not find out about the shooting until two hours after it occurred because they were at a rehearsal. Upon arrival to the hotel, they were questioned by FBI officials, as Hinckley was staying on the same floor they were.

“Several members of the cast as well as myself were questioned,” Wilson said. “To my knowledge, no one had talked to Hinckley.”

OU President Joseph Champagne said that when they all arrived back to the hotel, everyone had to show identification and were questioned.

One cast member was concerned over these questions. They were asked their names, phone numbers and schools, but were not told why the officer wanted the information or what was to be done with it.

Other cast members, like Devar, praised the FBI on their work following the shooting.

“We weren’t harassed at all,” he said.

A spokeswoman for the FBI bureau in Washington said that the questioning of students was standard procedure.

“They were questioned probably because they were just there,” Wiley Thompson, special agent for the public affairs office, told The Observer.

Champagne said after the shooting was a “good time to do some real soul searching.” He emphasized the importance that undergraduate students “have a chance to think through the moral and social implications” of their actions.