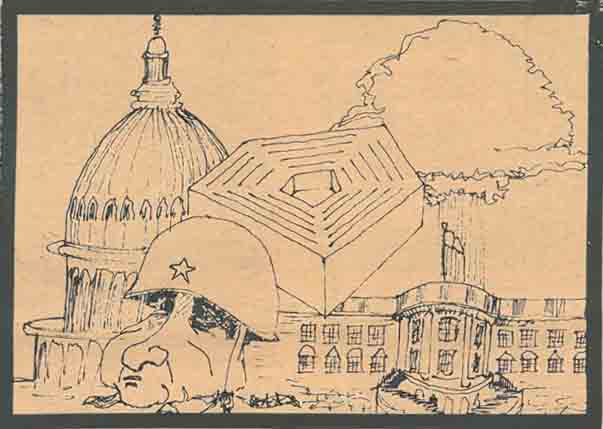 A cartoon illustration of Nixon.

Looking Back: Campus reactions to the Vietnam War

On Jan. 24, 1969, just four days after President Richard Nixon was inaugurated, an Oakland University newspaper called The Oakland Observer ran a story entitled “The Nixon Ascendancy and the State of the American State.” Less than a year later, The Oakland Observer would be no more.

The Observer was well-known for its radical opinion sections and stories that challenged the status quo. By the end of its 10-year life, the paper had to be printed in Ohio, as no local publishers would even print it.

In this Jan. 24 article, Mike Honey, editor-in-chief of The Observer, made strong claims against America’s participation in the Vietnam War. His article was 3 1/2 pages long, stretching over seven separate chapters, all connected to the one overarching theme of Nixon’s election.

In part, Honey wrote, “It has come as a shock to many to witness the blood and material poured into a war 10,000 miles away from home for reasons of ‘national security,’ in a nation the size of Florida.”

On Nov. 15, 1969, the largest anti-war protest took place in Washington D.C., where 250,000 Americans gathered to peacefully protest the war. Nixon, who ran for presidency wishing to appeal to a “silent majority” of Americans who supported the war, was then confronted with the reality that many Americans, especially college-aged ones, were opposed to it.

Honey, in his 1969 editorial, wrote, “[The Vietnam War] was a calculated attempt to maintain the hegemony of American free enterprise over a vital center of raw materials, Southeast Asia. Vietnam is the crucible of American Capitalism.”

He continued to argue there was a ruling class in America, and that this ruling class was based partly in capitalism.

“ . . . no one rises to power without money; that money can only be obtained thru [sic] cooperation with the men who control the system of corporate capitalism and its media, ie., the managers of the corporations, their allies in the government, and their friends in the military,” Honey wrote.

Protests of the Vietnam War were ever-present at Oakland, as they were at many college campuses around the U.S.

At OU, Lee Elbinger was one of the front-runners of an interesting plan to protest the war. Elbinger, who was suspended from OU for having sexual intercourse in a dorm room, returned from his suspension and formed the O.C.T.G.O.H.H., the Oakland Committee to Gross Out Hubert Humphrey.

Humphrey was Lindon B. Johnson’s vice president, and he came to OU in 1965 to talk about the value of higher education.

In regard to the anti-war efforts on campus, Humphrey himself said, “Controversy is the heart of the United States, and I encourage dissent, discussion, and debate; but we must at some time, finally make decisions on pertinent matters.”

This was the only time in the entire speech that Humphrey mentioned anything relating to Vietnam, according to an Oakland Observer article published on Oct. 29, 1965.

During Humphrey’s appearance at OU, Chancellor Woody Varner presented him with two petitions from the OU student body. Both were concerned with the Vietnam War.

Varner said he was proud of the sophisticated ways in which the students handled expressing their emotions about the war.

Leading up to Humphrey’s appearance on campus, Elbinger laid out a plan to have all 2,000 OU students pass gas to give Humphrey a “hint” about how college-aged students felt about the war. Elbinger later said he never meant to be serious about his plan, according to The Observer.

Elbinger decided that instead of causing a mass-gas protest, he would write a political column for The Observer. He then went on to study independently in New Orleans, sparking OU’s Independent Study program, which many students use to this day.

Eventually, The Observer hired two new reporters, both of whom studied in Vietnam and had strong feelings about the war. David Black and Marc White spent the summer of 1966 writing articles about the Vietnam War for the Associated Press. Both wrote articles about campus-wide protests and on-campus fasts held by students who were against the war.

Honey, Black and Elbinger traveled in the summer of 1967 to Hong Kong to study, making stops in Japan and Taiwan. The Observer reporters heard first-hand accounts from American servicemen about how they felt about the war, as many servicemen took vacations in the countries the reporters were studying in.

Black wrote in one article dated Dec. 8, 1967, that an African-American serviceman from Detroit said he was glad people were demonstrating against the war and hoped their efforts were successful, so all of the soldiers could go home. Black went on to say that even the pro-war militants said that it was a necessary war and that they were “unlucky” to be the ones to fight it.

Editors at The Observer began to organize demonstrations and partake in public silent vigils. One big instance was when pro-war Senator Edmund Muskie came to campus. He would later become the secretary of state under President Jimmy Carter.

Prior to his visit to OU, Muskie said he would speak for three minutes and leave the rest of the time open for questions.

Students timed him, and after three minutes, interrupted his speech. They asked him questions regarding the war, comparing the war to situations happening in the U.S. In the end, Muskie chose one of The Observer’s editors to ask a question.

Students then began a silent vigil to remember victims of the war. They moved outside and crowded around Muskie’s car, only ceasing when Muskie’s security came onto the scene to disperse the crowd.