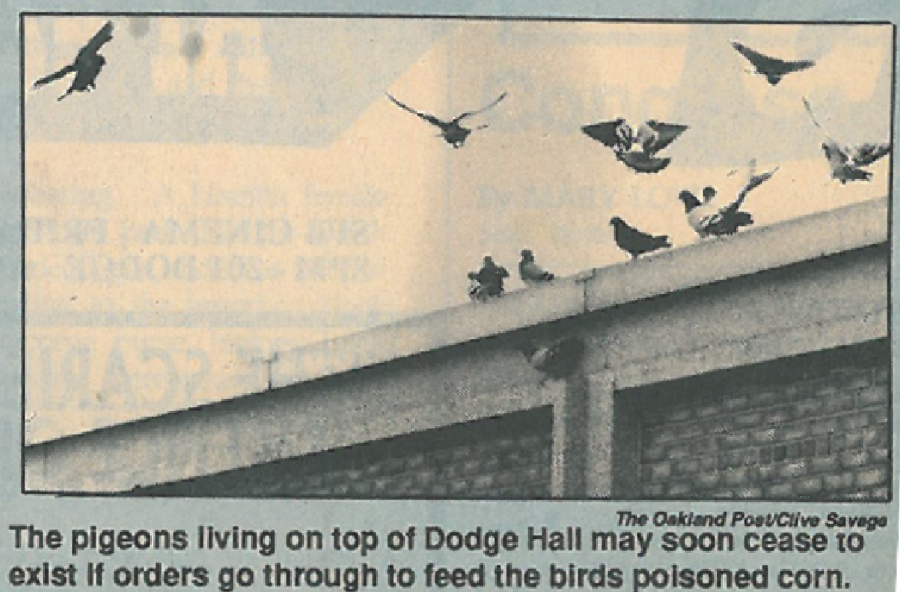 This photo ran in the Feb. 17, 1993, issue of the Oakland Post with the caption: “The pigeons living on top of Dodge Hall may soon cease to exist if orders go through to feed the birds poisoned corn.”

Looking Back: The plight of the pigeons

The year 1993 was a terrifying year for bird lovers at Oakland University. An estimated 100 birds made their home on the roof of Dodge Hall, to the dismay of professors spending their days there.

“It’s a horrible problem,” said Frank Giblin, associate professor of biomedical sciences, in a February 1993 issue of The Oakland Post. “The heat from the refrigerator is an ideal breeding area. They are breeding here and their droppings are all around.”

The article said that apparently the pigeons were living underneath a refrigeration unit, and feathers and the fecal matter accumulated over the years was causing a “slimy green film that emits an ammonia-like stench.”

This smell then invaded Dodge Hall through air ducts and cracks in the structure. Associate Professor of Biomedical Sciences Sitaramayya Ari was assigned to conduct research in the lab after a two-year vacancy.

“We have to work here the whole day,” Ari said. “It hurts your lungs if you’re exposed to it [for] a while. If you are in the lab the whole day, and if you open and close the room, it smells for three hours.”

Carol Hertzel, respiratory specialist from the American Lung Association, said technicians exposed to the lab for prolonged periods of time were more likely to contract several diseases, including psittacosis, which is a disease directly related to pigeon waste.

The plan of action was to feed the birds poisoned corn to kill them as humanely as possible and prevent any long-term health problems for OU faculty.

Giblin said animal control groups were “going to go crazy,” but believed the pigeons were causing a health concern for the OU community.

Gary Tiscornia, executive director of the Michigan Humane Society, went on to say, “Why do you need to kill them? Killing only has a short-term effect.”

However, after about 10 phone calls and a death threat, the plan was scrapped.

The Oakland Post opening for the Feb. 24, 1993, issue read, “Buckling beneath the mass of anti-pigeoncide phone calls and a single death threat, university employees have waffled on their decision to poison the flock that turned their lab into the little shop of odors.”

“With all this publicity, I told them (campus facilities and operations) ‘Please do not poison them . . . that doesn’t seem reasonable anymore,” Giblin said. “I do not want this lab bombed.”

The new plan was instead to weld metal sheets to the refrigeration unit with gaps large enough for mice or sparrows to go through, but too small for pigeons.

“If somebody says [the pigeons] aren’t a health hazard, we’ll let them be,” said Alberd Nordheden, landscape architect. He also said there was no university effort to feed the pigeons anything, including tainted corn.

In the two issues of The Oakland Post in which the pigeon commotion was happening, The Oakland Sail, the owners of The Post, decided to delay filing a lawsuit against the Board of Trustees over alleged violations of the Open Meetings Act, following a plea from University President Sandra Packard.