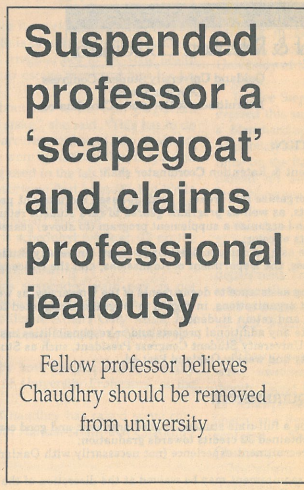 Looking Back: The curious case of G. Rasul Chaudhry

Oakland University claimed that during 1992 and 1993, G. Rasul Chaudhry was overseeing research done with the HIV virus in 304 Dodge Hall.

On Nov. 1, 1995, OU President Sandra Packard sent a letter to G. Rasul Chaudhry, associate professor of biological sciences, following a tip from another professor and a subsequent investigation about possible academic misconduct in the HIV research.

“It is with great sadness that I must inform you of Oakland’s intent to impose discipline against you . . . for your acts of scientific and professional misconduct,” Packard wrote.

Gary Russi, who was vice president of academic affairs at the time, made the recommendation for Chaudhry’s punishment. Chaudhry was forced to teach a full load of classes, despite the fact that this reprimanding letter said he was unable to become a full-time teacher until fall 1998.

Fay Hansen was one of the professors who reported Chaudhry’s research. Chaudhry responded by filing a libel suit against her.

“This seems to be the classic response, to sue the whistleblower,” she said in a November 1994 article written by The Oakland Post.

However, Chaudhry maintained his innocence. He said in another article that the university had no proper protocol for warning students about HIV research, and said that the room he did his research in was the only lab in Dodge Hall to have a biohazard warning.

He was represented in court by Stephen Landau.

“This is a world-class researcher, the university should be proud to have him as a faculty member,” Landau said in a November 1994 article in The Post.

Fay Hansen, however, said she didn’t learn until February 1993 that this research was happening.

“I think he should be removed from the university,” she said.

However, he wasn’t. As punishment for academic misconduct, Chaudhry was not permitted to do any research at OU until May 1, 1996. In addition, he wasn’t able to apply for or receive any internal or external research funds until that date.

However, as of today, both Chaudhry and Hansen are still teaching at OU’s Department of Biological Sciences.

This week, The Oakland Post contacted both Chaudhry and Hansen to discuss what they thought about the eventual outcome of the situation and their feelings on the matter over 20 years later.

“I did what any responsible faculty member would do, which is to bring student and post-doctoral complaints about a perceived human safety issue to the attention of my superiors,” Hansen said.

She doesn’t regret reporting Chaudhry. When asked if she’d do it again, she said, “Yes. The health and safety of our students, staff and faculty is of utmost priority. Who wouldn’t?”

Chaudhry did not reply to The Post’s email.

Recently, Chaudhry has done stem cell research, which he said he believes can help lead to vision aid in the near future, according to a 2015 Morning Sun article.

Hansen now teaches classes at OU on organic farming, human biology and histology. She is also the founder of the Campus Student Organic Farm.