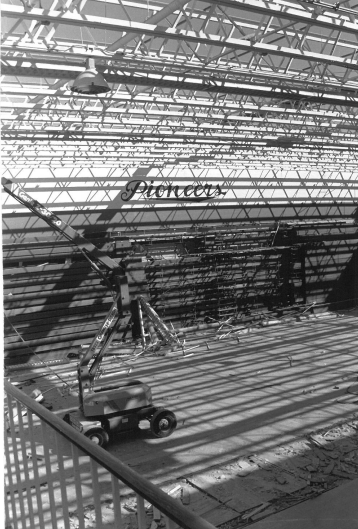 Looking Back: Birth of the bear

2017 marks Oakland University’s 20th anniversary as part of NCAA Division I athletics. With that move, OU athletics was changed forever.

Construction began on OU’s first athletic facility — the building now known as the Recreation and Athletics Center — on Oct. 21, 1961. At the time, the building was called the Lepley Sports Center, and was only a small portion of what the Rec Center is today.

The facility opened in 1963 and was meant to house only intramural sports for a campus of 1,279 students.

In March 1988, the Lepley Sports Center was named the worst athletic facility in the Great Lakes Conference. At the time, OU had 12,500 students and 11 varsity sports.

“It’s not much more than a high-school gym,” Parsons said.

At the time, the Detroit Pistons practiced at Lepley and classes were regularly scheduled there, as well. With the Pioneer varsity teams, there was little time for OU students to use the area as a recreation center.

By 1996, the university had decided to renovate Lepley and held basketball play in the Athletics Dome until construction on the updates was complete.

On Nov. 17, 1998, The Grizz mascot made his debut on the basketball court for a game against Michigan State University in the new recreation and athletics center.

The Grizz comes on the scene

When Oakland first started entering the athletics scene, the university adopted an unofficial mascot, Pioneer Pete. At one point in time, he was a space pioneer. But students began to draw him wearing a raccoon cap, and the design stuck.

According to an article The Oakland Sail, then Oakland’s student newspaper,  ran back in March 1986, it was men’s basketball head coach Greg Kampe’s idea to change the mascot.When the university made the move to Division I of the NCAA, they had to come up with a new mascot that would be marketable. This led to the formation of a Mascot Advisory Committee, which had 19 people on board. Their job was to find a new mascot to represent Oakland.

The committee had very strict criteria for its new mascot, though. It had to be animal-based, unique, have regional ties, be collegiate and have graphic potential. Focus groups and the board also insisted on a mascot that was gender- and race-neutral.

Pioneer Pete didn’t fit many of the criteria.

Of the Golden Grizzlies, Saber Cats and Pioneers, Golden Grizzlies stuck with many test groups. Once the design was out, it became a favorite of many and eventually found its way into being the university’s official mascot, leaving Pioneer Pete in the dust. 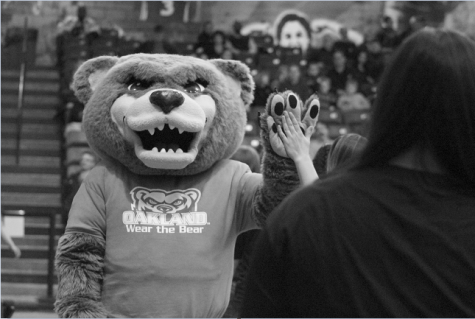