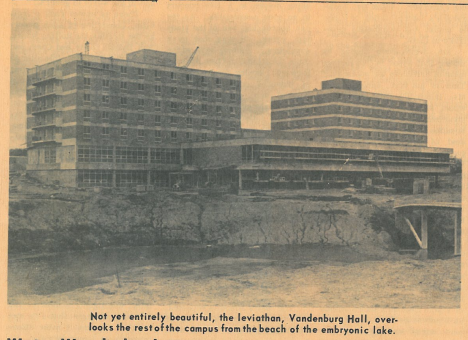 Looking Back: The history of Bear Lake, campus “water wonderland”

Bear Lake is a landmark on Oakland University’s campus. Between Vandenberg Hall and the Oakland Center, the bridge connecting Vandy and the OC has actually been there longer than the lake itself.

The mud pit used to be home to campus events like tug-o-mud and a famous mud fight.

Back in May of 1966, the area where the lake is used to be a giant mud hole. There were no plans for the lake to be home to any wildlife, and it was explicitly forbidden for students to boat on the lake. By 1967, the lake had been stocked with fish.

Originally, the lake was to be finished when construction was finished on Vandenberg, but union strikes halted the completion of the lake.

The original Oakland Observer article unveiling the lake’s plan called it a “water wonderland,” and a “scenic lake.” The lake was part of a university-wide attempt to “beautify” the campus.

By September of ‘66, the lake had taken up the name “Beer Lake.” The story goes that a student threw a beer can into the mud and christened the area Beer Lake. The paper called the finished lake a “swale-hole.” One story stated that George Karas, the director of the physical plant, had no knowledge of the lake being called Beer Lake.

At the time, rumors were circulating that there were surveying stakes in the water to “pierce the first unsuspecting swimmer.”

This, of course, was only a rumor. The water, according to the article, came from surface drainage and was “anything but polluted.”

And those weird cement structures still in the water today? They are to regulate the water level of the full lake.

A year later, a rumor circulated that Vandenberg Hall was slowly sinking into Beer Lake. Another rumor was that there was a sink from a junkyard sitting at the bottom of the lake.

Beer Lake was also known for students playing ice hockey on it. But in the winter of 1966, two students fell through the ice. At one point, the ice thawed enough for goalie nets to sink to the bottom, but they were eventually recovered.

Another rumor was that a student promised that if his bowling team won a tournament, he would drop his bowling ball off the seventh floor of Vandenberg. They won the tournament and fulfilled his promise. It took him three attempts to recover the bowling ball from the lake.

In 1968, the Oakland County Department of Health stated that Beer Lake was “unsuitable as a public bathing beach.”

The reason? The water could be unsanitary because of possible pollution from a county drain and the effluents from the heating system in Wilson Hall.

In addition, a preliminary study conducted by two OU students said that bacteria of the family Enterobacteriaceae were inhabiting the water.

This type of bacteria can cause serious intestinal disorders like typhoid. At the time, William Forbes of the Biology Department said Beer Lake was poorly planned, and that there should have been more consideration for the risk of pollution. He said the lake could be a danger to anyone in the surrounding area.

But bowling balls, sinks and beer cans weren’t the only thing to be found at the bottom of the lake. Numerous cars found themselves taking swimming lessons after rolling out of the OC’s parking lot.

Most students remember the car that rolled in from P2 in 2014, but did not know the history behind the lake’s many victims.

The Oakland University Alumni Association Facebook page recently posted a photo of a Big Boy statue found in the lake.

“I woke up in the morning and looked out my dorm room window, it was foggy but there rising out of the fog in ‘Beer Lake’ was Big Boy,” alumni Marshall Copeman was quoted on the page.