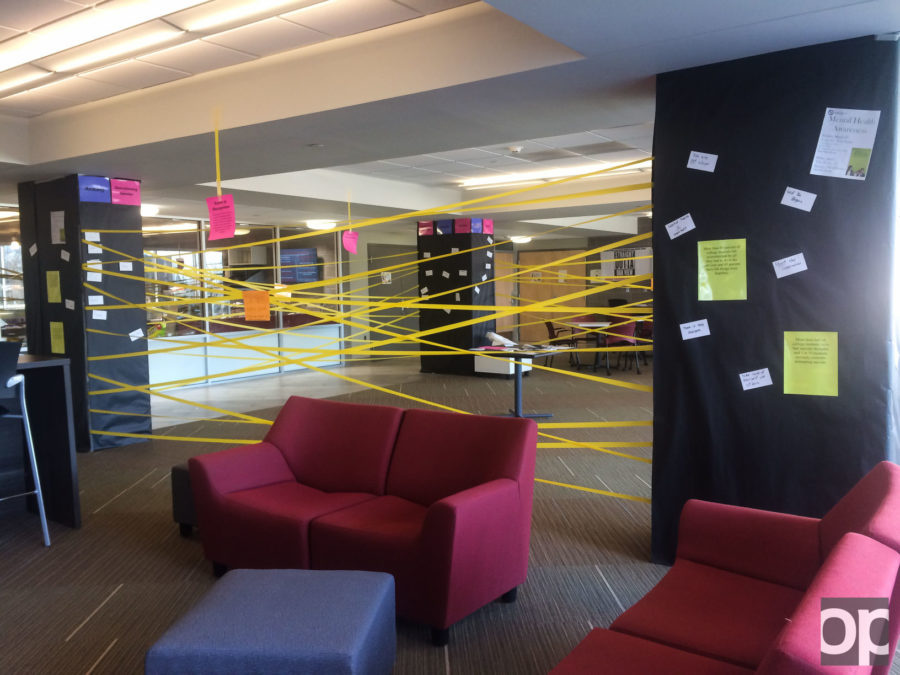 The Residence Hall Association (RHA) worked with the Graham Health Center to put together a “Room of Recognition” in Oak View Hall. The display was also purposely crafted in order to prevent the entire thing from collapsing if one string of the walls were pulled down.

The Residence Hall Association (RHA) worked with the Graham Health Center to put together a “Room of Recognition” in Oak View Hall.

Leacadia Herweyer, the national and domestic communication chair of RHA, put together the display in observance of mental health awareness week at Oakland University.

Throughout the week-long display, participants could write a name and tape it onto black pillars to recognize themselves and those in their lives who are affected by mental illness.

By the end of the program on March 31, Derweyer said 131 cards were put up for display.

In addition to providing a space for students to recognize mental health in their own lives, crisis hotline numbers and information about the Graham Health Center were provided in the center of the display.

According to Herweyer, the installation itself was a collaborative effort.

The Graham Health Center assisted in creating this display. They helped make sure the display was both impactful and sensitive, so people walking by would be able to gather information and not be triggered by the content.

“I talked to my advisor and the design of the room was a compilation of his ideas and mine,” she said.

The room was constructed by putting black paper around four pillars in Oak View Hall, and connecting them with yellow ribbon.

The display was also purposely crafted in order to prevent the entire thing from collapsing if one string of the walls were pulled down.

Herweyer also said there was fear it would be torn down but she was not too worried.

“Most students would let us know if it was vandalized,” she said.

In addition to drawing interest, the program also helped Herweyer grow as a person.

“I learned a lot about myself while putting the room together,” she said. “It was my first program as part of RHA.”

Along the outside of the room, statistics and information about mental health were put up for any students to see.

The National Alliance on Mental Illness (NAMI) put out a report in 2012 about college students and mental health. The group found that 50 percent of students who suffered from mental health problems did not report this to their university.

One survey respondent in the study was concerned that the information would become part of some permanent record and that negative stigma still existed around the idea of mental health.

“We decided to put the display up now because contrary to popular belief, the most suicides happen in the beginning of the summer not the winter,” Herweyer said.

Herweyer also said that college students are the least likely age group to seek help for their mental illnesses.

“I made this room to show that they aren’t alone,” she said.

According to Herweyer, as much as 25 percent of the American adult population will suffer a diagnosable mental health problem in their lives.

Students worried about their own mental health can take a free anonymous mental health screening at oakland.edu/GCC/onlinescreening.