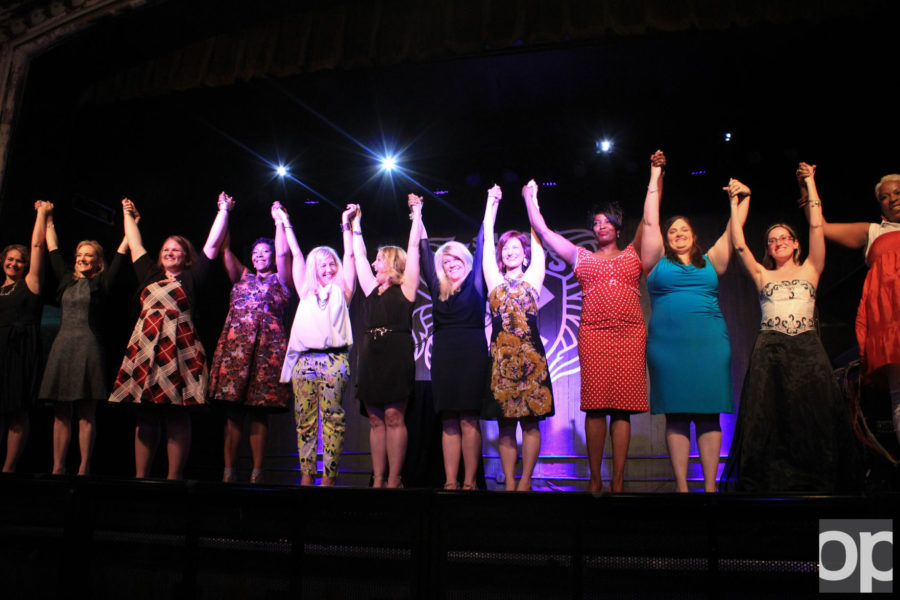 The storytellers shared personal moments they'd experienced with their own mothers, children and grandmothers.

Women from metro-Detroit gathered during the weekend to share stories of motherhood and celebrate their unique experiences.

On May 1 at St. Andrew’s Hall, the storytelling showcase “Listen To Your Mother” (LTYM) was brought to Detroit for the third year in a row.

The production was first created in 2010 in Madison, Wis. by Ann Imig.  Since then, it has become a national phenomenon, with shows in 41 cities this year throughout the two weeks leading up to Mother’s Day.

Angela Youngblood and Angela Amman have worked as co-producers and co-directors for three years, bringing the show to Detroit.

This year, 12 women took the stage and shared short stories about their experiences with motherhood. The storytellers included professors, writers, journalists, chefs and more.

“It’s an organic way of expressing the relationships people have with their mother, with their children, with other people in their lives who have been like mothers to them,” Amman said.

Not all of the women were biological mothers.  Some shared stories about nieces and nephews, surrogate children, grandmothers and their own mothers.

St. Pierre spoke about her great-grandmother and Francis shared her beliefs on modern-day motherhood vs. society’s thoughts on motherhood.

“I’m humbled beyond words to share space, telling stories with such wonderful people,” St. Pierre said. “Their words have the kind of power that only the best stories do.”

The people involved in this year and past productions have created a network of support and community with one another.

“We got into this to tell stories and it’s kind of become this family,” Youngblood said. “We’ve all stayed connected and it’s this network of friends and family …”

Beyond the connections made between the storytellers and producers, LTYM aims to connect with the audience through these shared experiences and emotions.

“The idea is that despite all of the differences we have as people, we do have so many more similarities,” Amman said. “Stories are healing for people.”

St. Andrews Hall was filled with approximately 100 audiences members of all ages for this year’s narrative.

People laughed and cried, shaking their head in agreement as each storyteller spoke on their common human experiences.

Local sponsors such as The Funky Frog, 4th Street Boutique and Avalon Bakery assisted in the community aspect through their support of this year’s show.

LTYM encourages national participation through their blog and website, listentoyourmothershow.com.

The community and personal connection was obvious before, during and after this year’s show. Anyone interested in being involved in next year’s production can audition in February 2017. All ages and genders are welcome.