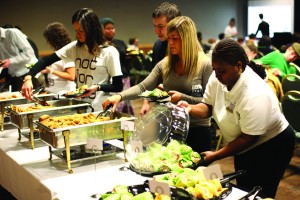 Food prices have long been an issue at Oakland University, but student organizations will now see lower prices when they order Chartwells catering on campus.

“The idea behind (pushing for lower prices) now was the number of student concerns regarding food prices began to climb at a rate that could not be ignored,” said Brett McIsaac, current OU Student Congress student services director. “Also, being in an office with Brandon Hanna, the (Student Activities Funding Board) chair, it was clear to see that too much of our budgets were being spent on food.”

SAFB provides funding to more than 200 students organizations on campus.

Food is a mainstay of many events held on campus and Hanna said that almost all food requests from student organizations are for Chartwells catering.

Hanna, based on funding allocation requests he received, estimates that at least $130,000 was spent on Chartwells food last year by student organizations.

“With a virtual monopoly over the Oakland Center, Chartwells enjoys the freedom of charging student organizations much more than competing catering businesses,” Hanna said.

Hanna and McIsaac collaborated on a report that assessed the cost of foods most commonly ordered by student organizations — sandwiches, pizza, chicken tenders and other staples — and found that most were available at area grocery stores for less than what Chartwells was charging.

“The biggest challenge was compiling all of the information,” McIsaac said. “Brandon Hanna and the (Center for Student Activities) did most of that work and did an excellent job doing it.”

From there, McIsaac and Hanna met with Dean of Students Glenn McIntosh, Oakland Center Director Richard Fekel and Chartwells Resident District Manager Gerald Gatto to voice their concerns and about how the SAFB budget could be helped.

The process has been ongoing since fall of 2008.

In a column published in The Oakland Post, Dan Evola, former student body president who was then serving as vice president, asked students to bring their “proverbial pitchforks and torches” to an Oakland University student congress meeting where Chartwells representatives would be present.

In February 2009, Andrew Bashi, then OUSC student services director, began working with students and the campus food service provider to find solutions to complaints about Chartwells.

A focus group comprised of students was created, which spawned changes to the menu offerings and prices offered up by mid-April of that year.

That was the last time price changes were made to the student organizations catering menu.

Three summer meetings with Chartwells resulted in drastic changes, especially for cheaper items like drinks. Gatto, Chartwells’ on-campus representative, had to contact Andrew Willows, a district manager for the Compass Group, a company of which Chartwells is a subsidiary.

Because Compass Group is a London-based venture, approval of the new prices had to come from across the pond.

Since Chartwells is the sole provider of all catering in the Oakland Center, a popular venue for student events, the new pricing will give considerable savings to student organizations.

“If I had to give an estimate, I would say that we’ve saved at least $5,000 this semester,” Hanna said of the new menu prices.

Gay/Straight Alliance treasurer Mark Martinez handles the ordering of food for the organization and estimates that he’s already spent about $600 on food this semester.

He sees the lowered student organization pricing as a step in a positive direction, but the sophomore linguistics and biology major said that feels like organizations are “against a wall” when it comes to catering options.

“It’s just a way to pacify us,” said Martinez of the price changes. “We’re not content and don’t think the food is worth as much as what we’re spending.”

The new round of adjustments means that lemonade now costs $3.85 for a gallon. That’s a reduction of over 70 percent in less than three years.

As of press time, no response had been received from Chartwells.

The prices and discounts are currently in effect for student organizations that order food and have been since Aug. 6.

There are also different pricing options for organizations that choose to pick up their own food instead of having it delivered and for paper product packages.

“There’s no telling exactly how much SAFB has potentially saved,” Hanna said. “Our main goal was to be able to give more student organizations funding for food without having to go over our budget, and we were able to accomplish that.”