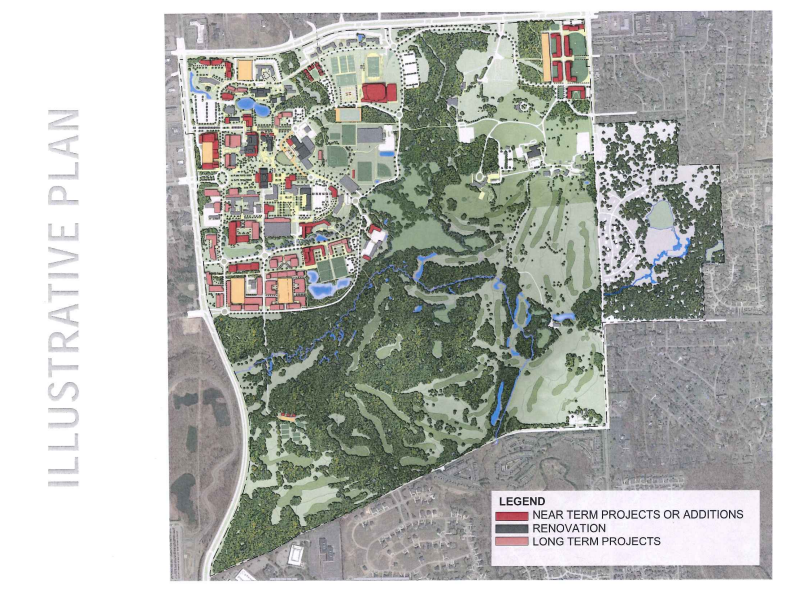 A new Campus Master Plan, approved at the June 6 Board of Trustees meeting, details how Oakland University’s campus could look in 2025 under ideal circumstances.

The plan was compiled over a nine-month period by a committee led by Co-Chairs Jim Lentini, senior vice president for Academic Affairs and provost, and John Beaghan, vice president for Finance and Administration and Board of Trustees treasurer.

“What [the plan] has delivered for us is a framework for future possibilities at a detailed level,” Lentini said. “Certainly, everything on that master plan may not come to fruition, but when the opportunities might come about for funding and certain priorities become great needs, we have a plan so we don’t have to start from scratch and think, ‘Where should we put that in? And how would it impact the next thing?’”

During early planning stages, both commuters and on-campus residents were able to participate in an online survey about how their OU experience could be improved. A total of 1,973 students responded, citing desires for more parking, dining options and places for both study and recreation.

Over 75 meetings were held during the planning process, bringing together ideas from the Master Plan Committee, Board of Trustees, President’s Cabinet, University Senate, students, faculty and staff, alumni and community members.

The overarching goals of the Campus Master Plan are for OU to have vibrant campus life, outstanding programs and a compelling physical presence. To meet these goals, the plan divides campus into academic, innovation, housing, athletic and historic districts.

It defines both near-term goals and long-term goals.

Eventual renovations of Hill, Van Wagoner and Vandenberg Halls are also included in the plan.

“Some of those [ideas] that are even on the short-term list may not happen. There’s a Convocation Center on there, for example. That would take enormous partnership or funding,” Lentini said.

Long-term goals include a rebuild of North Foundation, an outdoor amphitheater and the creation of a South Housing Village, complete with recreation fields and additional dorms.

Way down the line, the planning committee would like to see 20% of students living on campus. With the projected growth, 4,600 beds would meet this goal.

“I think that Southern Housing District is probably more likely to happen than many of the other projects on campus, for instance the Student Convocation Center or Performing Arts Center. Those really don’t have a funding method. Housing does, because you pay to live there,” Beaghan said.

In the long term, the corner of Squirrel Road and Walton Boulevard could be dedicated to a health professions district, while the southwest corner of campus may become a research district.

Although not all elements on the plan will come to be, the most-recent Campus Master Plan from 2001 reserved space for the Ann V. Nicholson apartments and the Recreation and Athletic Outdoor Complex, which eventually saw the light of day.

However, Lentini said, “Other than projects already announced, nothing is a done deal.”

Although new parking structure or lot development is not imminent, the planning process included a parking consultant and the executive summary includes three Parking Management Strategy Options, which are still open to discussion and subject to change.

Currently, there are 7,663 parking spaces on campus at a ratio of 0.33 spaces per student/staff member. Based on the projected 11% growth, 855 parking spaces would need to be added to maintain current parking conditions.

Lentini and Beaghan noted that implementing a fee and permit system would not be a viable money maker because any fees collected would likely go back into maintaining the system.

Nothing official has been concluded about parking management, but the need for some sort of change is acknowledged in the plan.

Within the next month, the full Campus Master Plan will be available on OU’s website. To view the executive summary of the plan, visit https://wwwp.oakland.edu/Assets/Oakland/bot/files-and-documents/agendas/2016/June-6/11.%202016%20Campus%20Master%20Plan.pdf.