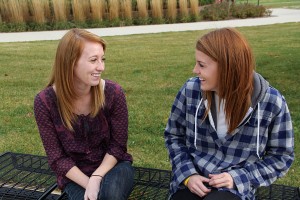 The current economy has forced many students to undergo a different type of college experience, one with more work and less play. Sisters Chelsey and Ronnie Booth both work multiple jobs, attend Oakland as full-time students, and still manage to find time for themselves in their busy schedules.

During the school year, Chelsey, a junior psychology major, works two jobs, totaling around 40 hours per week — which is nothing compared to her busy summer.

Taking classes and maintaining multiple jobs, Chelsey was working around 60 hours per week. Ronnie, an undecided freshman, also spends 20-30 hours per week at two jobs during the school year.

“I didn’t even realize how much I work. I wish I had the money to show it,” Chelsey said.

The money Ronnie and Chelsey make goes towards school, living expenses and bills.

Chelsey is on student loans, which only allows her $4,000 per year. Ronnie was awarded a $3,000 academic scholarship per year, but will soon be joining her sister on a loan plan. Luckily, their parents have helped pay the difference for the time being.

“I have realized that school isn’t free anymore, so I really have to work and try to maintain a good GPA to keep my scholarship,” Ronnie said.

With hardly any extra paychecks for themselves, saving money is a must in their situation.

“We hardly ever eat out. We buy all generic brand groceries, and the bare minimum of what we need. We have been saving a lot of coupons lately also,” Chelsey said. “I had a bridge card at one point when I first moved out, and that helped a lot.”

Chelsey and Ronnie try to be smart when it comes to making and dealing with money in this tough economy.

Both girls have limited access to savings accounts to use if they ever find themselves without enough money.

“This was something that our parents helped us set up because they knew that there would be a time where we would feel like we don’t have any money,” Ronnie said.

Both sisters agree that balancing school and work is a difficult task, but playing on OU’s women’s lacrosse team is their way of finding some relief.

“Lacrosse is a way to get away from everything for a couple of hours. If I didn’t play lacrosse, I would be so much more stressed out,” Ronnie said.

They’re in the process of moving into a townhouse together and the situation has forced both girls to make some sacrifices. Chelsey has found another job, and Ronnie has taken extra hours at her workplace in order to pay all the bills.

“Moving is so expensive … it is a lot of payments all at once,” Chelsey said.

They exemplify the story of many others who face struggles in this economy, but friends say their success is earned by their ability to put work first and play later.

“Chelsey and Ronnie both have tremendous work ethic. They maintain jobs while also balancing lacrosse and school, and still manage to be full time friends too,” said junior public administration major Reanna Douglas. “They work hard and have fun. They are great girls.”