SOUND OFF: Respond to these remarks on higher education 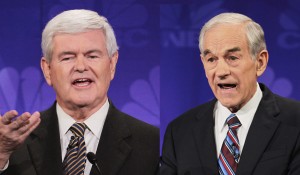 While the Republican presidential debate presented by CNBC and the Michigan Republican Party revolved around a multitude of issues that have far reaching implications, none reached students, faculty, staff and administrators of Oakland University more than the issue of student loan debt.

“I want to turn the attention to why we’re here on this campus and what many students are very interested in, and that is the fact that, Congressman Paul, right now, we are looking at student loan debt that is near $1 trillion. Americans owe more on student loans right now than credit cards, and the average debt for a college senior right now is over $25,000. It’s obviously a very hot topic right here on this campus and with students across the country. Just listen to what they have to say.”

“Well, I think you proved that the policy of student loans is a total failure. I mean, a trillion dollars of debt?And it’s going to be dumped on the taxpayer? And what have they gotten? A poorer education and costs that have skyrocketed because of inflation, and they don’t have jobs. There’s nothing more dramatically failing than — than that program.So, no, there’s no authority in the Constitution for the federal government to be dealing with education. We should get rid of the loan programs. We should get rid of the Department of Education and give tax credits, if you have to, to help people.But the inflation is the big problem. It’s three times the rate that the government admits that inflation is, and that is natural and normal. When governments inflate the currency, it goes in the areas that the government gets involved in, housing, high prices, stock market, skyrocketing prices, medical care, skyrocketing, education …”

“But how do they pay for it? How do they now pay for college, if they’re not …”

“The way — the way you pay for cellphones and computers.

You have the marketplace there. There’s competition. Quality goes up. The price goes down. Can you imagine what it would have been like if the Department of Homeland Security was in charge of finding one person or one company to make the cellphones? I mean, it would have been a total disaster. So when the government gets involved in the delivery of any service — whether it’s education, medical care, or housing — they cause higher prices, lower quality, create bubbles, and they give us this mess that we’re in. That’s why we have to eventually get our — we have to wise up.

And look at where the bubbles come from. It’s from the Federal Reserve. And we should start by auditing the Fed, and then we should end the Fed. “

“Speaker Gingrich, Congressman Paul just talked about a bubble. And there are many that are concerned that, unlike other types of debt, student loan debt does not have the same type of consumer protections. It cannot be wiped out in bankruptcy by law. There’s really little way to refinance it. Are you worried about student loan debt becoming the next government bailout?”

“You know, this is a good place to talk about the scale of change we’re about to live through. We’re at the end of the welfare state era of dependency, debt, distortion, and dishonesty.The student loan program began when Lyndon Johnson announced it, I think, with a $15 million program. It’s an absurdity. What does it do?

It expands the ability of students to stay in college longer because they don’t see the cost. It actually means they take fewer hours per semester on average. It takes longer for them to get through school. It allows them to tolerate tuitions going up absurdly. By 2014, there will be one administrator for every teacher on college campuses in the United States.

Now, let me give you a contrast that’s very startling. The College of the Ozarks is a work-study college. You cannot apply to it unless you need student aid, and they have no student aid.You have to work 20 hours a week during the year to pay tuition and books. You work 40 hours a week during the summer to pay for room and board. Ninety-two percent of the students graduate owing no debt, the eight percent who owe debt owe $5,000 because they bought a car.

Now, that is a model so different, it will be culture shock for the students of America to learn we actually expect them to go to class, study, get out quickly, charge as little as possible, and emerge debt free by doing the right things for four years.”

Here are some remarks from Oakland University Student Congress.