Focus on the debate: Student profile 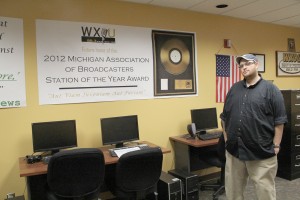 The theme of the upcoming GOP debate is “jobs and the economy” and Phil Berard, WXOU’s general manager, is no stranger to dealing with both of those issues.

Berard, 27, is a senior cinema studies major who has to juggle his jobs as a student leader and an autoworker with classes. He works a shift from 5 p.m. to 4:30 a.m. Monday through Thursday at General Motors’ Lake Orion plant.

He estimates he gets about five hours of sleep on most days, since he also takes class and handles his managerial duties at the campus radio station.

“I don’t sleep on Thursdays because of my schedule,” said Berard, who finds time to host a two-hour jazz program on WXOU every Friday morning. “It’s easier to stay awake than to get an hour and a half of sleep. Homework happens on the weekends.”

It’s a grueling schedule, but one that was necessary for Berard after being unemployed for two years.

“It gets myself out of the hole I ended up in because I’m back in school and didn’t have a full time job for some time,” Berard said.

Berard grew weary of his path after transferring colleges multiple times and decided to take time off of school to work in the auto industry in 2003.

“I was just trying to find my way through life,” Berard said. “So I began working in the factories of the auto industry at 19.”

He’s had to deal with the employment woes related to the economy and, correspondingly, the hard-hit auto industry. In 2004, Berard was working at Bentler Automotive in Galesburg, Mich.

The company underwent rounds of layoffs after the price of steel tripled, Berard said. It was the first time he sensed a change in American manufacturing.

“When China made a mass buy on steel while their economy was booming, they had to scale back some jobs at my factory,” Berard said. “All of the sudden the contracts we had signed had predetermined prices that just went out the door.”

Originally choosing to go to school on the west side of the state, Berard moved to southeast Michigan to try out college once again at Oakland Community College, but a job offer from General Motors in 2006 lured him back to the assembly lines once more.

Berard came to OU in 2009 after being laid off by GM in February of that year. Berard had been working at the GM Pontiac Assembly Center, which was shut down, and had helped produce the Chevy Silverado truck.

The skills Berard learned as a relief operator, which required him to complete a different job every day, has carried over into his time at Oakland University.

“You had to adapt quickly in radio and that’s what I was good at so it helps with my college radio career here,” Berard said. “A lot of things come your way.”

Every now and then, he finds time to mentor radio students at Avondale High School.

“Phil works really hard,” WXOU program director Katie Hepfinger said. “But I do sometimes wish he were around the station more so we could work on more radio projects together, but I understand why he has to work.”

He said jobs and the economy do remain on the forefront of his consciousness because of his situation. Though it takes time away from his studies, he said remaining at GM could give him some crucial tuition assistance.

“I went from having no jobs to having two jobs,” Berard said. “Sometimes I have those ‘grass is always greener moments.’”

Though he identifies himself as a democrat, he’s hoping presidential hopefuls will have the right answers for solving the country’s economic problems.

“I think for all of us that are hoping to find lucrative jobs, it’s important that we reinvigorate the country with manufacturing jobs,” Berard said.