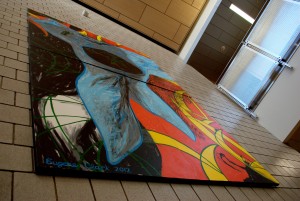 In the Fall 2012 semester, Oakland University’s Human Health Building opened, becoming the new home to the School of Nursing and the School of Health Sciences.

According to Andrea Eis, associate professor of art, Senior Project Manager John Harmala told Eis the building had plenty of spaces for exhibiting art, and asked if art could be furnished for the building.

Eis, who was Art Department chair at the time, along with Art Gallery Director Dick Goody, came to then Provost Moudgil with a proposal.  A budget of $50,000 was allotted for art in the HHB, according to current Interim Provost Susan Awbrey.

The building is also home to three large murals by Lecturer Eugene Clark, titled “Artis Anatomica.” More pieces of art, all produced by OU faculty, will be on display in the HHB.

“They told us initially that they were going to pick three separate artists — one for each wall. But I submitted multiple designs and they liked the continuity of the work,” Clark said.

Clark said he was inspired by “the underlying imagery of the human figure” as well as forms found in nature, based on the type of classes taught in the HBB.

Each mural is made up of four separate canvases. The building was still under construction when the paintings were being produced, Clark said, so the modular design made the murals easier to transport.

In addition to the murals, pieces of art from eight members of OU’s faculty will be on display soon. Among them is a piece called “Neighborhood Gathering” by lecturer Rachel Reynolds, which features several brightly-colored fire hydrants.

Reynolds said the piece was inspired by artist Robert Zahorsky, with whom she shares a studio. She selected the piece for the HHB because of its vivid color scheme. “You wouldn’t want to put anything that’s too moody or dark in a public place like that,” Reynolds said.

“I’m happy to get it out of the studio and into a bigger audience,” said Reynolds, “and also draw attention to the work of Robert Zahorsky.”

Clark said he was incredibly excited to have his work prominently featured in the HHB.

“It’s a dream come true,” Clark said. “It’s been a life-changing and career-changing experience for me.”

“It really does feel good,” Eis said. “It’s important for the university (and) for the students and faculty to see real art — to know that there’s this connection to the faculty who are teaching here.”

Clark’s painting is visible on the fourth and fifth floors of the HHB. Paintings by other faculty artists are scheduled to be displayed soon.