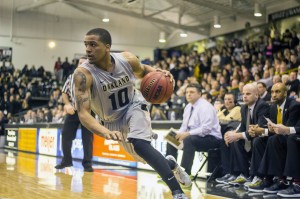 Coming off a career-high 47-point effort against IUPUI, Travis Bader led the way for Oakland, scoring 26 points in yet another record-setting night in which Kampe became just the 21st coach in NCAA Divison I history to tally 500 wins in a career.

Even after avenging a 10-point loss suffered back in December against the Summit League leaders in Western Illinois and gaining the team’s first marquee win, Kampe was quick to direct attention to the effort of his team.

“This wasn’t just a big win for me,” Kampe said. “It was a bigger win for this team and all the credit goes to them for the fight and defense they exhibited on the court.”

“This has to be the biggest victory of the season so far just with everything we’ve been through,” Bader said.  “Tonight showed just how far we come as a team and to get Coach (Kampe) that milestone win really helped bring it all together.”

The first half proved to be a back and forth game as the Golden Grizzlies were tied with WIU at 30 heading into the half. WIU ended the half shooting over 50 percent from the field.

Oakland stepped up the defensive pressure in the second half, forcing the Leathernecks into many low-percentage shots around the perimeter and shooting just 47 percent in the period.

“Coming into this game, we focused on defensive pressure and in the second half we really locked down and stuck to the game plan,” guard Duke Mondy said, finishing with 18 points and four assists in his second game off the bench.

To start the second half, Coach Kampe pulled Mondy from action for a brief period in the game to settle him down after a turnover, only to re-insert him moments later in a move that the guard could only praise his head coach.

“Sometimes as player you feel as if you know everything,” Mondy said. “With the tough love relationship me and Coach have, I had no problem with it.”

The win didn’t come easy though, as Western Illinois battled back and forth with Oakland making the Golden Grizzlies work on every possession, both on offense and defense.

Western Illinois guard Remy Roberts-Burnett led the way for the Leathernecks scoring 16 points, including tying the game at 52 with five minutes to go on an open three-pointer from the wing.

Mondy broke the tie hitting one of two free throws, giving OU a 53-52 lead. He  followed that with another trip to the line, hitting both critical free-throws to put the Grizzlies up 55-52 with just under four minutes to play.

Western Illinois never got closer than three points afterward, with OU hitting their free throws down the stretch to put the game away for good. But it was the perimeter defense and rebounding that helped the Golden Grizzlies take firm control of the contest.

“I’m amazed at how far we have come as a defensive unit,” Kampe said. “Moving forward with some of our offensive challenges, the only way we pick up wins is with our defense and that’s where the focus will be.”

The Golden Grizzlies hit the road next to take on the University of Nebraska-Omaha at the Ralston Sports and Event Center Feb. 2.  Game time is scheduled for 2 p.m. as Kampe looks to record win number 501.