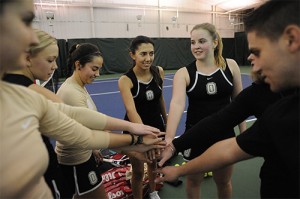 The Oakland University women’s tennis team was picked fifth in the Summit League Preseason Poll Jan. 11.  This is the highest preseason ranking in the program’s Division I history, with the team having received 24 points in the poll.

With a 2-17 campaign last season, including a 1-7 record in Summit League play, head coach Heather Redshaw’s squad features an array of new talent to a team with two returning players in junior Grace Keating and sophomore Ashley Grant.

“Coming off of last season and having a new team, we want to change the outlook on the year,” Keating said.  “We want to set a new standard of winning starting with this team.”This year’s team will feature seven freshmen from around the world.

Tamara Blum and Emily Raidt are natives of Germany, while Juliana Guevara and Karine Celis join the team by way of Columbia.

“Tennis around the world is different everywhere,” Redshaw said.  “Recruiting from outside the country, I was looking to take our team to the next level adding different elements for different levels of competition.”

After dropping the dual-season opener to Michigan State during a hard fought competition, OU continued to receive great play from its incoming freshmen.

This season, they will be looked upon for veteran play in their first year in collegiate tennis.

“I feel like these girls have the potential to be way better,” Keating said. “They’re well-developed in their game at such a young age and it’s going to help take our team to the next level.”

Despite the influx of fresh faces on the OU women’s tennis team, there is no lack of leadership heading into the season with the goal of a Summit League title in mind.

Coach Redshaw said the freshmen will be looked upon to help lead one another in an effort to maximize the potential of her diverse group of talent.

“We definitely will look to Emily to lead the way,” Redshaw said. “Even though she is a freshman, with her hard work on the court and in practice, she blends in with the veterans on the team.”

With the idea of the young talent maturing on the fly, Redshaw will continue to rely on her returning players to groom them for the upcoming year.

“Grace is like the coach in competition,” Redshaw said. “She pushes these girls on and off the court to work hard in practice, in competition or in the classroom and that focus will be what drives us to success.”

That drive for success will continue as the women move forward into the season and conference play.

Even though the honor of being named fifth in the preseason comes as a surprise to Coach Redshaw and her team, her expectations and the success of reaching them will serve as no shock to any member of the squad.

“At the end of the day, winning the league championship is what matters,” Redshaw said. “Preseason doesn’t translate to wins and we still got to work hard and face the competition.”

The women were defeated against Detroit in their first match of the season, 7-0. They will return to competition Feb. 18 against Webber International at a neutral site in Orlando.