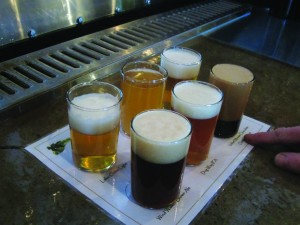 The 51 North Brewing Company opened its doors to the community of Lake Orion this past January with their own concept and way of doing things.

Located on the corner of 51 North Broadway St. off of Lapeer Road, the 4,700 square foot building, which originally was a gas station turned- car dealership, now houses the only microbrewery in the township.

Owner Don Gindhart, after looking for various locations around the Metro Detroit area, came to Lake Orion per the advice of a fellow brewer who had looked at Lake Orion for a potential site the previous year.

“When we originally came up with the idea of opening a microbrewery, we wanted to find somewhere with a small town feel,” Gindhart said.  “I wanted community members to fall in love with us before spreading the joy around the rest of area.”

A brewer by trade, Gindhart has brewed at several brewing companies around southeast Michigan over the years, including Detroit Brew Factory and Royal Oak Brew Company.

After trying several different combinations of brews over the years, Gindhart and a few friends rekindled the thought of opening 51 North after finding some consistency from the recipes designed.

“I wasn’t a good brewer starting out seeing as how it was something I just picked up, but I stuck with it through the years with it being a dream of mine to open a microbrewery and now here we are,” Gindhart said.

Along with the homemade brews that Gindhart brings to customers, he looks to keep the concept of in-house going with the food menu that features homemade dishes using local products.

Don’s wife, Mary Gindhart, is the head chef at 51 North. With every homemade dish, tries to bring the family vibe that the Gindharts look to bring the community of Lake Orion.

“Growing up I had a big family and I was always cooking so there was plenty of time to come up with my own taste,” Gindhart said.

After mentoring under the likes of Chef Rick Ornsby of Wilson’s Pub and Grill in Commerce Township and Executive Chef Dan Giroux of the Detroit Golf Club, Mary has taken the approach cooking unpretentious, healthy food using fresh ingredients.

With no fried foods on the menu, Mary looks to bring a new meaning to bar food with the likes of her “gluten-free tortilla,” the stuffed jalapeno peppers with chorizo and their hot wings made with a homemade sauce.

“Being a personal chef and caterer the majority of my career, training under the likes of those chefs really taught me how to portion food and create my own taste,”  Gindhart said.

Aside from the custom-made menu and venue, 51 North also looks to keep customers flocking entertainment provided by their in house bands: Velvet Krush and DM3 led by Don Gindhart guitar player, bassist and vocals.

“What we wanted to do here was something that is rarely done with places like this in southeast Michigan,” Gindhart said.

“Not many places can give you one of a kind taste in beers and food, while showing you how to have a good time with live music. We wanted to make this a one-stop shop for those looking for a good time with family and friends no matter the age.”  Gindhart said.

For more information about hours and menu items, visit the company website at www.51northbrewing.com