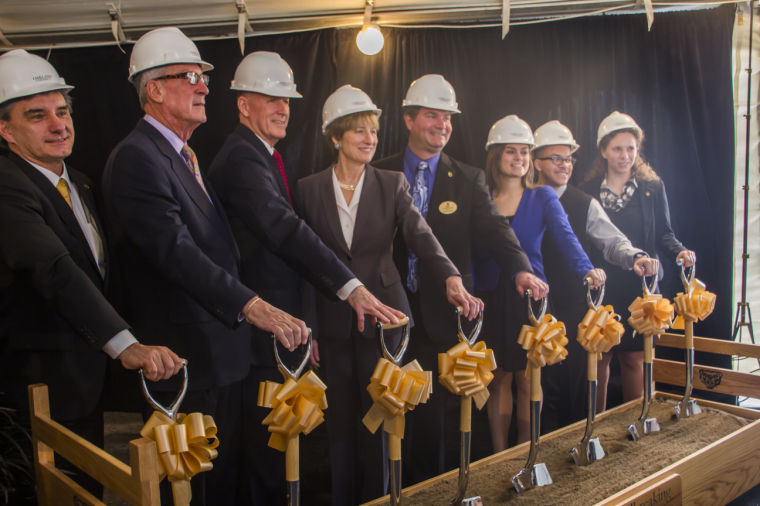 The ground breaking ceremony for the upcoming $30 million housing complex commenced in a crowded tent in Parking Lot 5 April 16.

The event was lined with several speakers from university faculty and student body, all of which have been working diligently on the project.

Among the faculty was university president, Gary Russi, who spoke on the importance of not just building a housing facility, but a community for the students.

“Only by investing in student programs and student experiences, such as this new housing complex, can we create a total campus community,” Russi said. “A community that I believe the students will see as their home and as a foundation for their success.”

Next to speak was the director of university housing, Jim Zentmeyer, who has been working to create new housing complex 2010.

Zentmeyer spoke on the hardships of the project, and cited the enduring enthusiasm and consistency of the student body as the reason it came to fruition.

Zentmeyer ended on the same note as Russi, stating that his vision for the complex was to make something far more than a dorm.

“My hope, come September 2014, is that this structure — brick and mortar — be instantaneously transformed into a place for future Golden Grizzlies, in every sense of the word, to call home.”

Finally, representing the students was former OU Student Congress president and current legislator, Samantha Wolf, who carried on the theme of not just building a housing complex, but creating a community.

“Living in Vandenberg allowed me to make several life-long friends, from a wide variety of cultural backgrounds, giving me a whole new family — an OU family,” Wolf said. “I would not be where I am today without housing.”

The ceremony ended as the eight speakers took to the their shovels and dug their way into a pile of dirt, and into what Zentmeyer concluded was  highly ambitious project.