Housing on campus is uncertain for some OU students 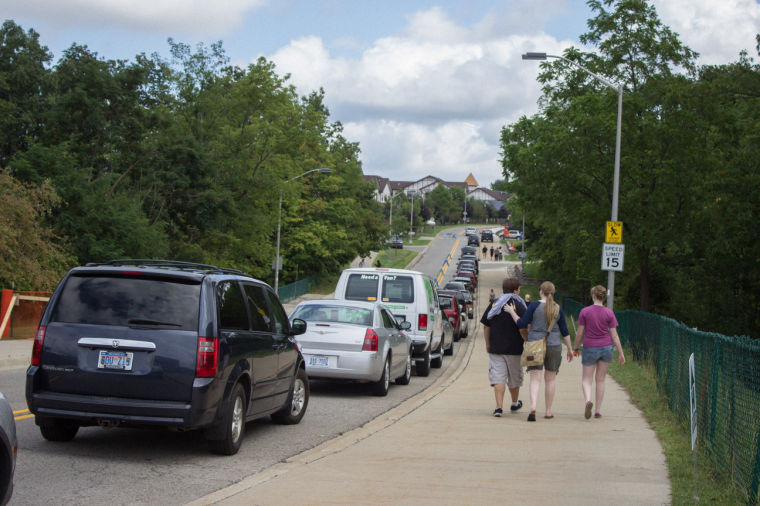 Students Make Their Way to Their New Home

On a day when excited freshman and transfer students crowded Hamlin and Vandenberg Halls to begin the check-in process and move into their dorms for the coming year, Michael McCord waited anxiously for news.

McCord, a junior transfer from Oakland Community College majoring in criminal justice, said that despite applying two or three weeks before the July 1 deadline, he had yet to hear anything about his room or his roommate.

“I’m just kind of concerned,” McCord said. “The whole point of moving into housing is just to kind of  get that college experience. Now that I’ve kind of been approved for everything else between financial aid and all that, it’s kind of upsetting to know that I don’t have a room yet for me to live these two semesters.”

Demand for housing has exceeded capacity each of the last two years. This has led the university to construct a new residence hall which is scheduled to be completed September 2014.

In the meantime, OU is experiencing some growing pains.

While OU does not guarantee dorm space, University Housing Director Jim Zentmeyer said OU has reserved 130 beds for students affected by the shortage at the Extended Stay Suites across from campus on University Drive. This number has grown from the previous years.

An unspecified number of students have moved into the hotel.

Raquel Wills, a senior majoring in health sciences, planned to live on campus for the first time this year. Instead, she gave up her room assignment after not being notified about it until August 28.

“I was unaware I was getting an apartment so I didn’t prepare for move in at all which was September 1st,” she said. “I have no time or money to get everything I would need so I of course cancelled.”

Wills had selected the George T. Matthews Apartments because they seemed close to the condo living she was hoping for. She said that she was not told three people would be in a two-bedroom apartment.

“I would (have) never applied for (Matthews) if I knew there was a possibility I would have to share a room,” Wills said. “The whole point of being in an apartment is having your own space.”

Wills is now on the hook for a $200 cancellation fee. She said the experience would leave her better prepared if she applied again.

Zentmeyer explained the university’s process for getting people in their rooms.

“Friday morning we received a listing of 150 names from the Registrar of students who were not registered for classes,” he said. “We check each of these names to see if they also had a housing assignment. Each of those individuals were contacted to verify that they decided at the last minute not to attend Oakland University this semester. We then utilized those spaces Friday evening to bring additional people into on-campus housing assignments.”

He said that individuals that are no longer planning on attending OU for whatever reason are identified throughout the check-in process. The situation is very fluid.

McCord, who has been into the housing office a few times to check on the status of his application, was told the hotel was being reserved for students not in driving distance.

“When I talked to them,” he said, “it sounded as though it was temporary housing for those that were kind of far away when school starts. Then when they had more room, they would kind of move you into the permanent housing.”

The Oakland Post will update this story throughout the week.