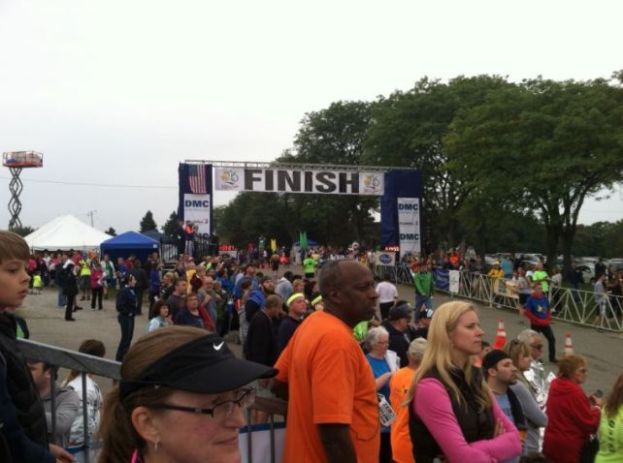 The sixth annual Brooksie Way attracted runners from all over who competed in 5K, 10K, and half-marathon races. The course weaved through Oakland University and parts of Rochester and Rochester Hills.

Among those running included Oakland students and faculty.

Allison Hallman, a senior majoring in Biology, ran her first half-marathon. She finished with a time of two hours, 11 minutes, and 37 seconds. It was Hallman’s first race longer than a 5K.

“I began my training over the summer, running about four times per week,” she said. “I gradually built up my mileage until I could run 12 miles. That was my maximum distance before race day.”

Hallman said all of the hard work paid off.

“When I finished I felt really accomplished,” she said. “I also felt really grateful towards the community and all of the volunteers who contributed to the events of the day and were cheering the runners on. Crossing the finish line was an exciting feeling!”

Hallman is graduating April 2014, so she is unsure if she will run in the Brooksie Way next year.

“If I am in the area [then], I definitely will because it was a great experience,” she said. “If not, I’ll look for other races closer to wherever I am living.”

James Windell, a lecturer in the Department of Sociology, Anthropology, Social Work and Criminal Justice, ran the Brooksie Way for his fifth consecutive year. He is in his first semester teaching at Oakland University. Windell earned his Master of Arts in Psychology from OU in 1972.

Windell, 73, guessed his half-marathon took around two hours and 45 minutes to complete.

“Very slow, but I finished,” Windell joked. “I just don’t pay any attention to the times because I’m not a fast runner.”

Windell is no stranger to running, however. He ran in the Detroit Marathon, his first and only 26.2-mile race, at at the age of 60.

Windell said he heard about Brooksie Way while he was a psychologist for Oakland County.

“It was publicized pretty highly among employees,” Windell said. “Because it was going to be at Oakland University, that made it more appealing.”

Windell typically runs 3-6 miles four or five days per week, but admitted that he wasn’t as ready as he would’ve liked.

“I never really could prepare adequately for doing it,” he said. “I should do a lot more hill work. I always regret it when you get to mile eight and the hills start.“

Even with all the physical preparation, Windell said mental toughness is key to get through a race.”

“To be able to do the distance. The biggest thing is emotional and what your mental state is,” he said. “You really have to proven to yourself that you can do it.”

He called the Brooksie Way course “difficult and challenging, because of all the hills.”

”Finishing always feels good and then with the vow to train better next year.”