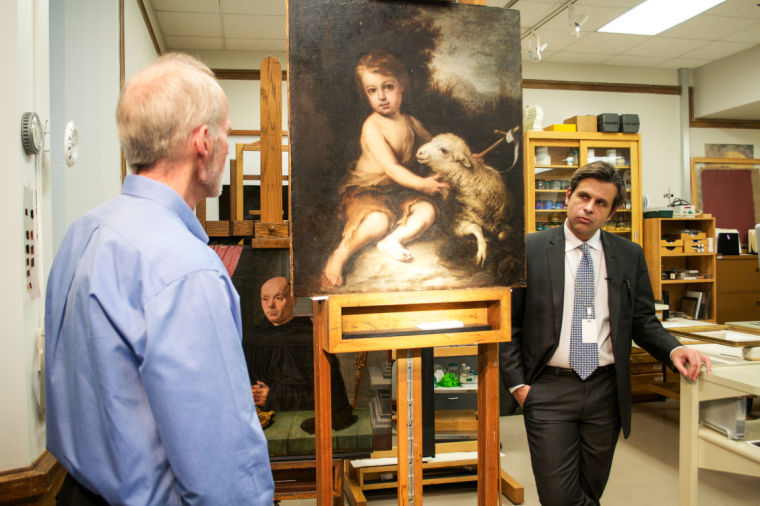 A 340 year-old painting, recently discovered hanging in Meadow Brook Hall, is nearing the final stages of restoration at the Detroit Institute of Arts.

Dr. Salvador Salort-Pons, head of the European Art Department at the DIA, discovered the painting, titled “The Infant Saint John with the Lamb,” when he was giving a lecture at MBH last February.

“I first saw the figure in the corner next to the piano,” Salort-Pons said. “It was kind of dark, but the first thing I saw that caught my eye was the figure of the child.”

Salort-Pons said the image of the child looked like signature work of Bartolomé Esteban Murillo, a famous Spanish Baroque painter in the 17th century.

Upon further scrutiny, he noticed the softness of the brushstrokes, a Murillo technique that would have been very hard to copy.

He was sure, and the DIA later confirmed, Meadow Brook had been housing a Murillo original.

Madelyn Rzadkowolski, MBH Curator, said she knew the painting was one of the best in their collection, but they did not know just how special it was.

Murillo worked in the predominantly Catholic city of Seville most of his life and gained much of his fame because of his religious paintings.

The Infant Saint John with the Lamb was painted around 1670.

After switching ownership multiple times, Matilda Dodge Wilson and her husband, Alfred Wilson, bought it from the John Levy Galleries in New York in 1926.

The painting had been hanging on the drawing room wall since Wilson had placed it there in 1929.

According to Rzadkowolski, the Wilsons purchased several paintings for their home, which was in the construction phase at that time.

They loved some of the artwork so much that they planned whole rooms around particular pieces.

Salort-Pons was excited to discover an original painting, which had been out of the public art world for more than 70 years, hanging in plain sight.

Because of the relationship between Meadow Brook and the DIA, Alfred Ackerman, head of conservation, and his team agreed to restore the painting.

They invited Oakland University students, from several majors, to attend the DIA twice, once in October and again Tuesday, Nov. 12 to observe the various conservation stages that the painting went through.

During their visits, students learned about the history of Bartolomé and the painting, observing the steps taken in restoration and discussed their opinions on the conservation of this particular piece.

“Ackerman has been removing dirt and old varnishes in trying to rescue the original image,” Salort-Pons said.

The painting is in, overall, good condition, but it has faded during the years and some of the elements of the handmade paints have deteriorated.

Ackerman and his team also discovered that Murillo had first painted the child’s right foot a little lower. It was hard to see before, but after several layers were cleaned up, the previous foot was quite visible.

Students got to debate on whether the conservation should include covering the foot back up, as Murillo did, or leaving it so the public could see the many steps Murillo took in painting this piece.

Residents of the Macomb, Oakland and Wayne counties can visit the DIA free of charge.

The Murillo will be hanging in the European paintings gallery next to other Baroque paintings from a similar time period.

“The Infant Saint John with the Lamb” is on loan to the DIA for five years and will be officially on display starting in February.