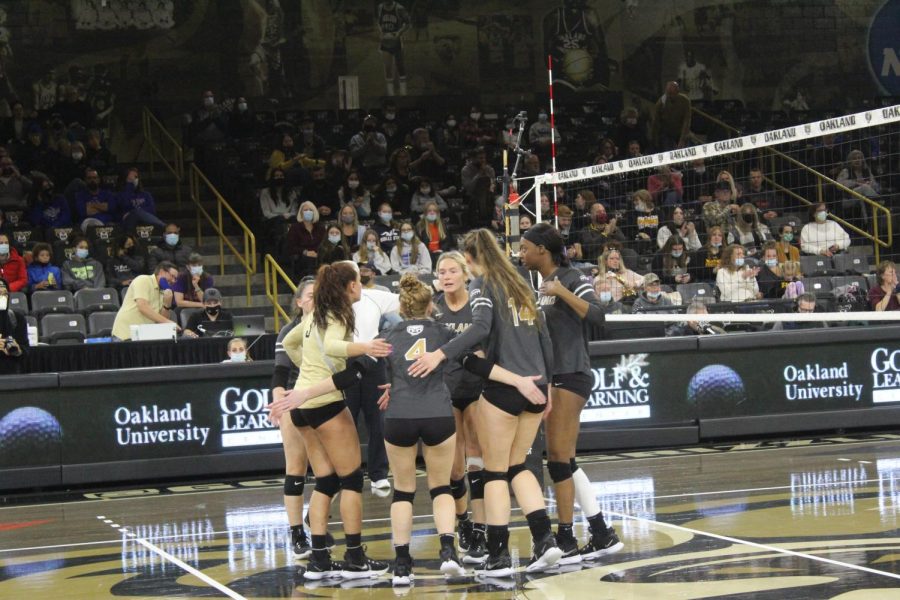 The volleyball team in a huddle after losing a point against Northern Kentucky on Nov. 13.

The Oakland University women’s volleyball team continued its season over the weekend as it traveled to Memphis, Tennessee to participate in the Beale Street Challenge.

The Beale Street Challenge marks the third of four regular season tournaments for the Golden Grizzlies.

Despite coming up short in all three tournaments so far, the Golden Grizzlies have shown promising flashes over the first few weeks of the season.

At the team’s first tournament of the year, the Top Dawg Challenge back in late August, Oakland fell to the hosting Butler Bulldogs, 0-3. The Golden Grizzlies dropped the first set of the match, 26-24, and failed to recover as the Bulldogs claimed the final two sets.

The following day, Oakland fell to Eastern Illinois in a five-set marathon match. The Golden Grizzlies won two of the first three sets, putting the Panthers on the ropes, but Eastern Illinois fought back and defeated Oakland.

The following weekend, the Golden Grizzlies took a trip to Kent, Ohio to participate in the Kent State Invitational.

Oakland posted a strong outing in its first two matches. It didn’t drop a single set as it plowed through the likes of Southern Indiana and Cornell, each by a score of 3-0. However, Oakland’s momentum came to a screeching halt in the final match of the invitational when it met tournament host Kent State.

The Golden Eagles defeated the Golden Grizzlies, 3-1, but it was a strong showing from Oakland.

Then, this past weekend, Oakland continued its travels as it ventured out to Memphis, Tennessee for the Beale Street Challenge. However, things did not go Oakland’s way.

The Golden Grizzlies dropped all three of their matches, falling to Illinois State, Memphis and Queens University.

In the third match of the challenge, the Golden Grizzlies jumped all over Queens, as they sprinted out to a dominating 2-0 lead. Despite the strong start, Oakland dropped the ensuing three sets to ultimately lose the match.

Oakland will now set its sights on the Green & White Invitational in East Lansing this weekend. The participating teams will be Oakland, Michigan State, Evansville and Chicago State.

The Golden Grizzlies currently sit at 3-6 on the season, and will look to make some noise in the Green & White Invitational before Horizon League play begins with a road match against Robert Morris on Tuesday, Sept. 20.

The team will then host back-to-back matches against Northern Kentucky and Wright State. Next Saturday’s match against the Raiders of Wright State is scheduled to be “Autograph Night” for the Golden Grizzlies.