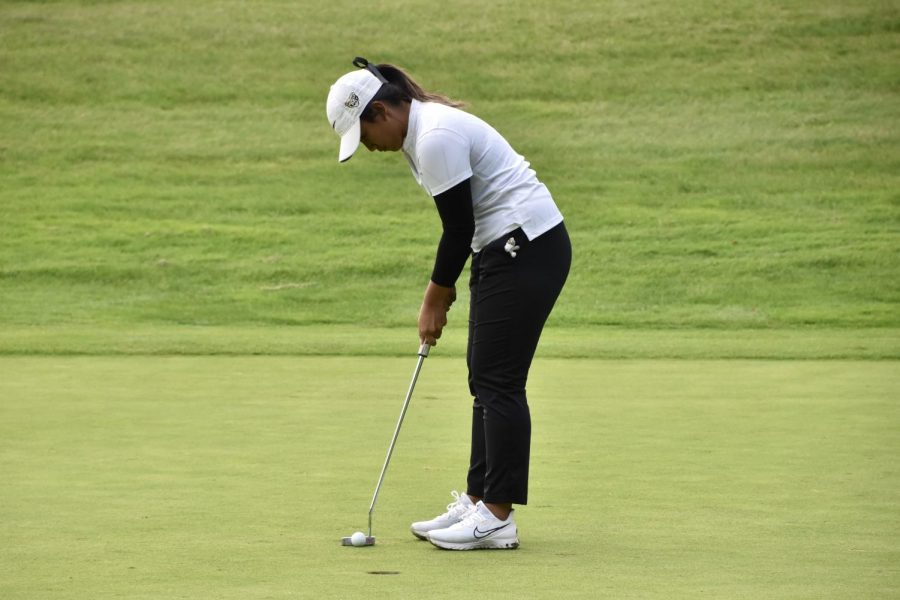 A member of Oakland University's women's golf team lines up for a putt on Monday, Sept. 27.

While many Oakland University students and staff were getting settled in for the first full week of classes of the 2022-23 school year, the women’s golf team was busy winning its first golf tournament of the season.

The Golden Grizzlies traveled to Kewadin, Michigan to compete in the A-Ga-Ming Invitational. Oakland posted a three-day total of 897 strokes to narrowly edge out Central Michigan’s 900-stroke three-day total.

The tournament took place over Labor Day weekend, from Sept. 3 through Sept. 5.

The Boczars are no strangers to the bright lights that come with being on the big stage.

Last fall, as seniors at Plymouth High School, the sisters notched first and second place finishes in the Division 1 state championship at Grand Valley State University. Bridget tallied a score of 143, and Grace finished just one stroke behind her with a 144.

Now, as freshmen at Oakland, the Boczars will be tasked with carrying a large portion of the Golden Grizzlies this season.

The victory marks the first of head coach Sarah Burnham’s in her tenure at Oakland. The first-year head coach replaced Alyssa Gaudio over the off-season.

Burnham was officially hired as the team’s head coach back on July 1, and she is off to a great start in her first season with the Golden Grizzlies.

Last season, Oakland also competed in the A-Ga-Ming Invitational, but the Golden Grizzlies came up just three strokes short of Central Michigan. The 2021-22 team went on to claim the Horizon League championship before being discarded rather easily in the NCAA Regional in Ann Arbor.

This season, the Golden Grizzlies got the better of the Chippewas — and six other teams — to win the season-opening tournament.

Oakland now enjoys a lengthy break during the fall portion of its season. The team will travel to Yorktown, Indiana to compete in the Cardinal Classic on Sept. 19-20.

Although the team stays rather local throughout the fall, the trips become much longer and nicer as the year progresses.

In February, the Golden Grizzlies will travel to Florida to compete in the Motor City Cup.

Later in February, Oakland will make a trip to Rio Verde, Arizona to compete in the Rio Verde Invitational. The Golden Grizzlies will then return to Florida in March to take part in the Spring Break Shootout.

The regular season will end in Bowling Green, Ohio, before the Golden Grizzlies make a third trip to Florida to try and defend its Horizon League title from a season ago. Should Oakland have success at the aforementioned task, it will make its second straight appearance in the NCAA Regionals.