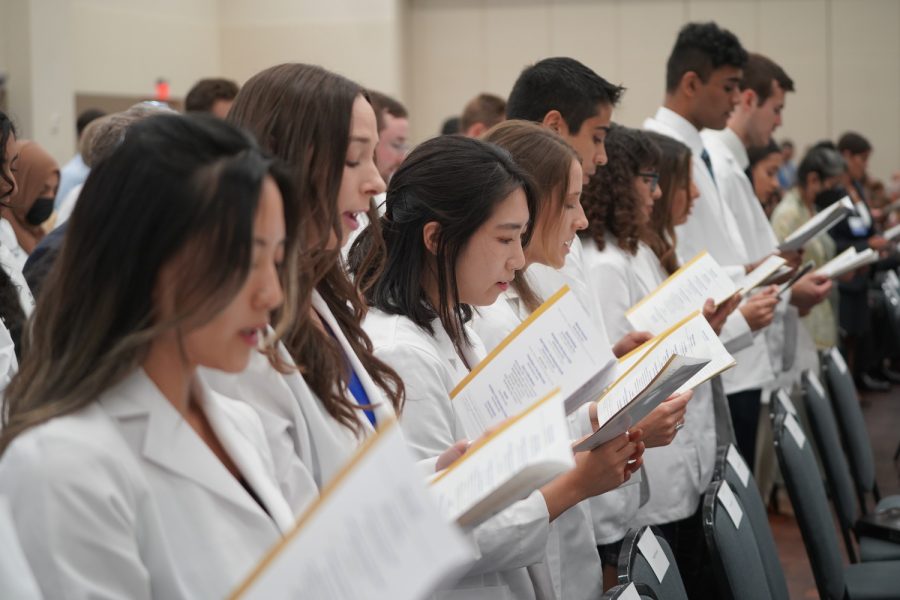 Members of OUWB's Class of 2026 recite the Oath of Geneva during the school's 2022 white coat ceremony.

On Aug. 1, the Oakland University William Beaumont School of Medicine (OUWB) welcomed the Class of 2026 to the beginning of their medical school journey with a white coat ceremony.

The afternoon ceremony was hosted by Oakland University (OU) in the Oakland Center (OC) ballrooms and marked the start of a weeklong orientation, which introduced the incoming medical students to OUWB.

Created by the Arnold P. Gold Foundation in 1993, the white coat ceremony is a rite of passage for medical students in which they are presented with the white coat that they will wear throughout their training. Students also take an oath that marks their matriculation into medical school, as well as their responsibility to care for future patients with dignity and compassion.

While relatively new in practice, white coat ceremonies are now considered a rite of passage for incoming medical students to mark their entrance into the profession.

“The white coat itself holds much significance,” Mezwa said in his remarks. “It is associated with science — a symbol that the medical profession is based on scientific inquiry. It is the uniform of medicine, and by wearing this uniform you are accepting a new level of responsibility.”

Other speakers’ remarks highlighted the unique qualities, interests, accomplishments and commitment to service of the Class of 2026, who acquired a total of over 165,000 service hours before starting medical school, as well as the road ahead.

“Your drive and determination is what created the path that led you here, to OUWB School of Medicine, and we look forward to watching you continue rising to the next challenges,” Browne said.

With the help of a Beaumont Health physician and faculty mentor, the Class of 2026 donned their white coats. Some students were even coated family members who are physicians.

The Class of 2026 was also gifted stethoscopes and received letters of encouragement from Beaumont Health physicians.

Giuliano Romano, a member of the class of 2026 who graduated from OU with a bachelor’s degree in biomedical science in 2021, looks forward to remaining a Golden Grizzly.

“I absolutely loved my time here going to OU for undergrad,” Romano said. “I had great experiences, made some lifelong friends, and the opportunity to continue my medical education here is a dream.”

Romano was also reflective on his efforts leading up to entering medical school and what wearing the coat personally means to him.

“I’m not wearing the coat just for myself,” he said. “I’m wearing it for my family as well. It was a lot of handwork and dedication.”

Kaithlyn Duong, a UC Santa Barbara alumna who graduated with a bachelor’s degree in biological sciences, described the moment she got her white coat as “everything.”

“Being a first-generation student, for myself and my family, this is something I’ve always imagined having and is an incredible moment,” Duong said.

The event concluded with the Class of 2026 reciting the Oath of Geneva, a revised version of the Hippocratic Oath, as a group.

The event was livestreamed for any family or friends unable to attend in person.

A full recording of the white coat ceremony is available to watch online.