School of Music, Theatre and Dance presents ‘Acis and Galatea’ 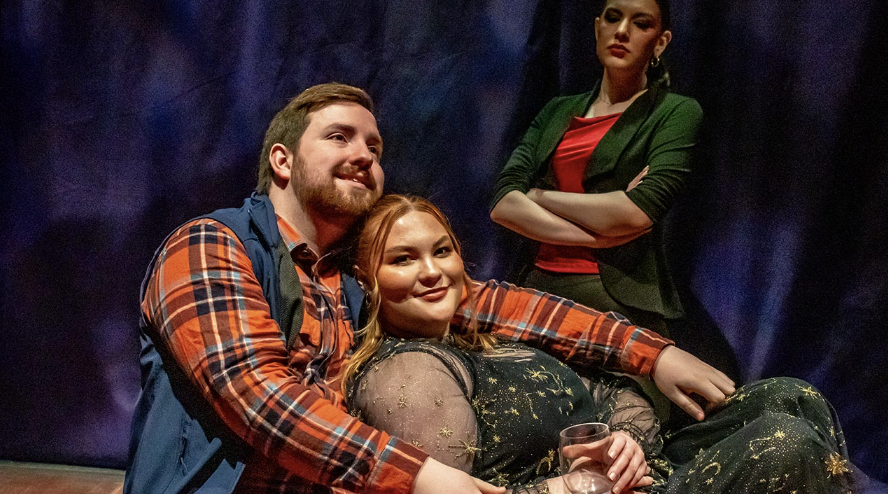 The final performance of "Acis and Galatea" concluded on May 15.

The Oakland University School of Music, Theatre and Dance (OU-SMTD) presented George Fredric Handel’s “Acis and Galatea” from May 5 – 8 and May 12 – 15.

Originating from a Roman poem about the tragic, short-lived love between a shepherd, Acis, and a nymph, Galatea, the story starts with a lonesome Galatea desiring to reunite with Acis, who feels likewise. Act one ends happily with the reunion of the two lovers before their joy is interrupted by the jealous, one-eyed giant Polyphemus, who threatens their happiness and eventually kills Acis off out of envy.

We aren’t all shepherds and nymphs whose great love is ruined by a cyclops. This is something that the OU-SMTD production of “Acis and Galatea” keeps in mind, so instead of mythological creatures, these characters are modern-day people just like you and me.

The choice to put a contemporary spin on Handel’s “Acis and Galatea” was a clever one — it gave the production a fresh feel for something that might otherwise seem mundane and frankly not relatable. Director and professor of vocal performance Dr. Drake Dantzler did this as a way “to help bridge theatrical and musical gaps.” This sort of approach to the production also makes it perfect for the education of the vocalists who performed, as it makes Handel’s message much more accessible

Though updating the theatrical aspects to fit a more contemporary palate is exciting, it comes with its obstacles.

“The greatest obstacle of modernizing this production […] is the threat of the update upstaging the production itself,” Dantzler said.

Students in the production had the obligation to remain faithful to the text while telling the story in a different context. In my opinion, they succeeded at this.

Another production feat which elevated this particular production was the use of the space. I have watched my fair share of shows in the studio theater here at OU, and I would say this is one of the more creative ways the space has been used. The way this production was staged kept audience members engaged and added levels to the performance at hand — and while this was not as consistent as I feel it could have been, it nevertheless caught my attention.

Additionally, the pit interacted with the characters — a detail I would have otherwise overlooked, but it added another layer to the show, making it more entertaining and fun to watch. It wasn’t just simple interactions the pit musicians had with the singers, but the inclusion of them throughout pivotal points of the story (e.g., “Hush you pretty warbling choir,” “Where shall I seek the charming fair?” etc.) This added another dimension to the show, elevating its quality.

As far as musicianship and performance go, the students who participated in this production were so wonderfully talented and a joy to watch and listen to. I may not be the biggest fan of the opera, but OU-SMTD’s production of “Acis and Galatea” was more than a pleasure to see.