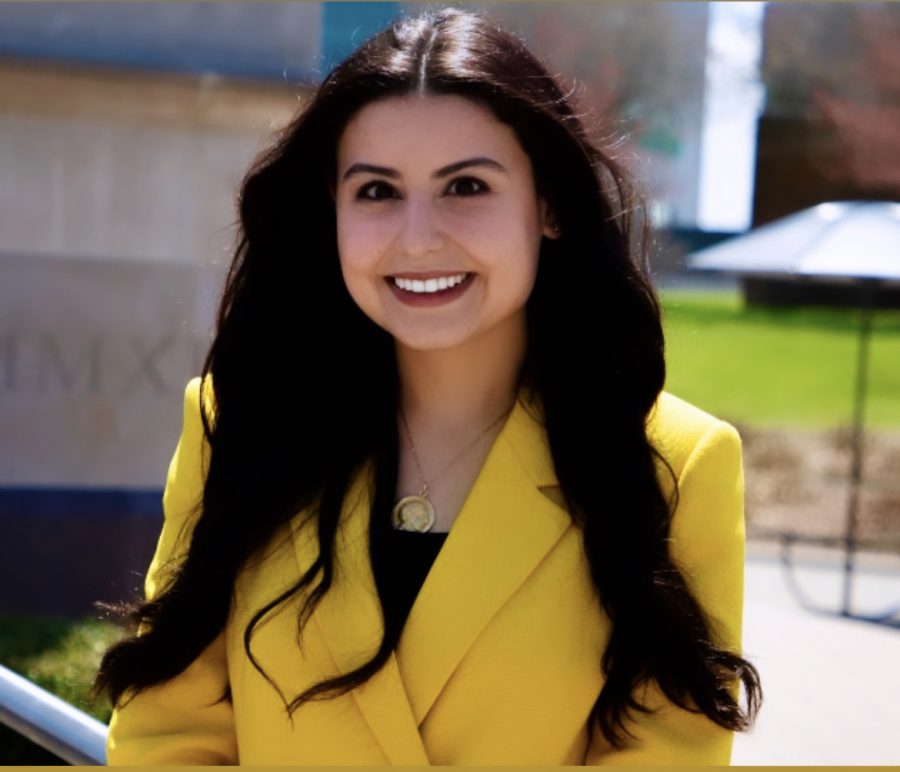 Gabrielle Abdelmessih is the editor-in-chief of The Oakland Post for the 2022-2023 academic year. She is a senior majoring in biomedical sciences and minoring in journalism.

With a wide breadth of experience and an aspiration to serve her community, Gabrielle Abdelmessih is gearing up to lead the Oakland Post team as editor-in-chief for the 2022-2023 academic year.

Abdelmessih started at The Post in 2021 with a passion for writing and a desire to communicate truth to the public.

“[Joining The Post was] an opportunity to combine my passion for science and writing, so I started focusing on research and scientific topics,” Abdelmessih said. “Part of why I joined The Post to begin with was that I was tired of [the] misinformation and disinformation that unfortunately became a signature of [the COVID-19 pandemic]. I saw it was a problem and I wanted to – in some way, using the abilities that I have – be a part of the solution.”

Abdelmessih shares that while she always desired a leadership role at the Post, a significant catalyst came in the form of an interview she conducted with former gubernatorial candidate Dr. Abdul El-Sayed.

“The moment that really made me consider [a leadership role] was when my grandparents read that story,” Abdelmessih said. “They immigrated from Egypt to the United States, and when they read that their Egyptian granddaughter is writing for a college newspaper, speaking her mind [and] interviewing a former gubernatorial Egyptian-American candidate – they were just floored.”

As a biomedical sciences major, Abdelmessih is the first pre-med student to become editor-in-chief at The Post. She believes that journalism and biomedical sciences are closely linked, and feels confident that her abilities in both fields will breed success in her new role.

“I think that clear communication and good listening skills are essential [in being] a good physician and a good journalist,” Abdelmessih said. “I really saw [through] interviewing people, writing stories [and] editing stories that a lot of those skills could be transferred to both aspects of what I want to do in my life. Being a physician and being a journalist –there’s a reliance on verifiable truth. There is a passion for making an unknown topic known and there’s also just a goal to improve the human condition.”

Abdelmessih has already outlined ways in which she hopes to change the direction of The Post. She plans to revive the “Arts” section readers might remember from a few volumes prior, and also intends to debut a new “Science and Technology” section.

“One other new thing that I want to make a goal for this year is to design an Oakland Post app where students, staff and faculty would be able to access our news,” Abdelmessih said. “Also, engaging with the campus community in terms of discussing diversity as well as local politics [will be a priority]. We have a gubernatorial [race] coming up, we have midterms — and as a university in Oakland County, we’ll be making sure to cover that.”

After she graduates, Abdelmessih anticipates a long career in medicine. She will be applying to medical school and would also like to be a medical news correspondent.

“My goal is to go to medical school and become a physician. That is a marathon and not a sprint type of process, but I’m enjoying the marathon,” Abdelmessih said. “It has its ups and downs, but I can’t see myself in any other profession. That’s what I’ve always wanted to do with my life.”

For now, Abdelmessih is focusing on the challenges and satisfaction of her new role as editor-in-chief. She hopes to continue to cultivate skills that will make her a good physician and journalist.

“The challenges and new things that I’m learning – I find to be very energizing,” Abdelmessih said. “I really like that I’m working with a group of highly motivated people that want to produce a weekly newspaper.”