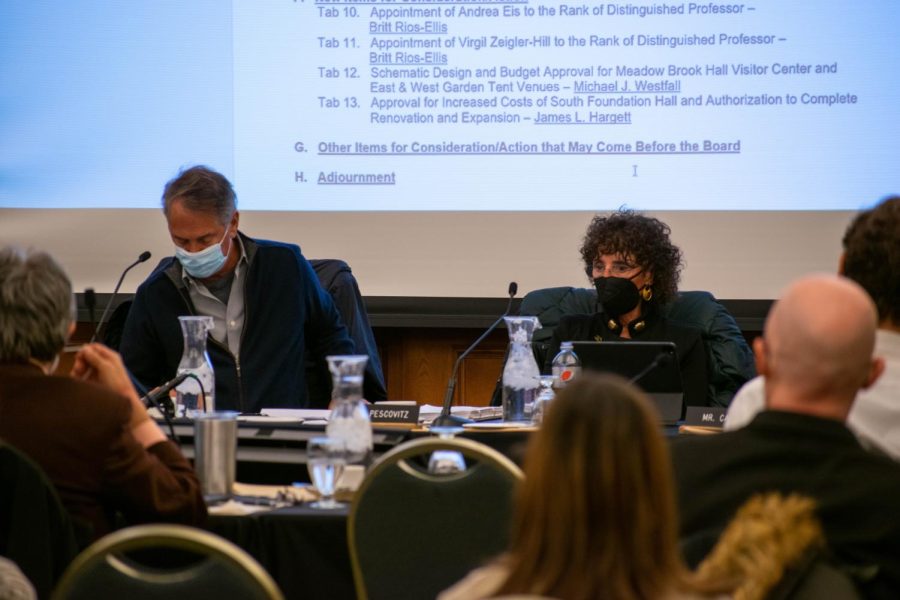 President Pescovitz and BOT Chair Robert Schostak during February’s Board of Trustees meeting. At yesterday's meeting, a new $25 million in spending was approved to acquire an off-campus learning facility.

Thursday the Oakland University Board of Trustees (BOT) met for one last time this semester to talk about a new program in the Department of Interdisciplinary Health Sciences (IDH), the approval of the acquisition of the property at 1500 University Drive for $25 million, student awards and more.

The meeting started with a live performance of “Hammer and Nail,” performed by associate professor of dance Thayer Jonutz and composed by John Anderson.

President Ora Pescovitz then talked about highlights within the OU community, one of which being their Strive for 45 campaign and how both Governor Gretchen Whitmer and the Michigan House of Representatives proposed a new budget which includes the amount of Strive for 45.

OU William Beaumont (OUWB) School of Medicine Stephen Sharf Dean Duane Mezwa then talked about OUWB progress and gave a general update on the program. Dr. Mezwa highlighted how scholarships awarded have increased under his leadership.

“The amount of scholarship dollars awarded has increased 53% since 2019, the number of scholarship awards has more than doubled [220 in 2019 and 552 in 2022] with 2.6 million or 80% of this increase coming from the clinical faculty scholarship program for PPAP (Physician Payer Adjustment Program),” Dr. Mezwa said.

Senior Vice President for Student Affairs and Chief Diversity Officer Glenn McIntosh presented the Alfred G. and Matilda R. Wilson Awards and the Human Relations Awards. The awards acknowledge seniors and graduates accordingly, for their contributions as leaders at OU.

“Today I’m going to read word for word these commendations to three outstanding students,” McIntosh said. “It would be a disservice if I did not read every word.”

Provost Britt Rios-Ellis announced a new program for consideration, which is the Bachelor of Science in Interdisciplinary Healthcare studies. It would be within the Department of IDH and would offer a degree to allow students to go into a non-clinical position post graduation.

Dr. Christina Papadimitriou spoke more on the two main reasons as to why the program needs to be implemented. Those being to fill a gap in the School of Health Sciences curriculum — as all the current programs prepare students for clinical positions — and the other being students leaving the School of Health Sciences because they are not interested in clinical positions but sister schools having the program.

A lot of the courses would be classes already offered at OU, with the total credits needed for the program being 120 with 88 being for the major. The program was approved by the BOT, but no timetable was announced for its implementation at the meeting.

The last new item addressed was the acquisition of the property at 1500 University Drive, which Rios-Ellis and James Hargett — interim vice president for finance and administration — asked only for approval of $8.15 million to purchase the property. Hargett announced the potential budget for future expenses like renovations, equaling roughly $21 million in the next five years.

This would provide immediate relief to spacing issues, as 10 classes would be used practically right away while other maintenance was performed on the building. Rios-Ellis is also hopeful the property will draw in more students closer to Pontiac and overall diversify OU.

Chair Robert Schostak offered a counter proposal, and insisted the board instead approve $25 million for the purchase and renovation of the property so it can be ready at max capacity right away. The board did approve of the $25 million, even though OU is currently budgeting and cutting costs across campus amid losing revenue from low enrollment.

The meeting ended without any closing remarks from the public.