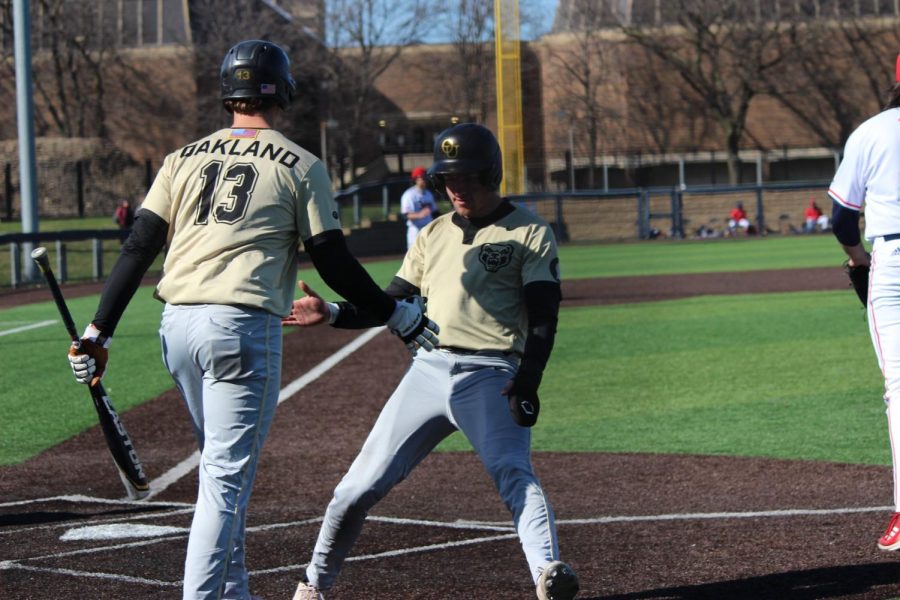 Seth Tucker scores on a sac fly to score the winning run for Oakland in game 1 of their series against UIC.

The Golden Grizzlies baseball team tasted defeat for the first time in a Horizon League series during this 2022 campaign, falling 2-1 to the UIC Flames last weekend.

With this series loss, the Golden Grizzlies now sit with a 15-15 record [.500 record] on the year, with a 7-5 Horizon League record. Following the postponement of a Friday game, the Saturday matchup between the Flames and Golden Grizzlies morphed into a doubleheader.

This doubleheader was split down the middle, as the Golden Grizzlies took game one with a score of 6-5 before falling to the Flames in game two with a score of 5-2. In the first game, the Flames came out swinging like their bats were covered in their own namesake, notching three runs in the opening inning to take a commanding 3-0 lead.

The Golden Grizzlies fired back in the third inning, scoring their first run to bring the score to 3-1. Then, the Grizzlies capitalized on their momentum in the sixth inning to tie the game up at 3-3 after scoring two runs. This started a race for the win between the Flames and the Grizzlies, as the Flames answered the two runs from the Grizzlies with a run of their own to retake the lead at 4-3.

The seventh inning saw the Golden Grizzlies score another pair of runs to recapture the lead with a score of 5-4. The Flames did not answer back in the bottom of the seventh, but they would score and tie the game back up at five in the following inning. This prompted a game-winning play that ended up being a sacrifice fly from left fielder Michael Stygles that went out to the right field, allowing Grizzly center fielder Seth Tucker to score the game-winning run.

In the second game, the Golden Grizzlies struck first and fast after scoring the opening rub in the first inning to jump out to a 1-0 lead. The Flames responded in the third inning, scoring three of their own runs to jump out to a commanding 3-1 lead. The Flames’ fourth inning went just as well as their third did, as they widened their lead on the Grizzlies by tacking on two extra runs.

In the seventh, the Golden Grizzlies tried to spark a comeback after scoring one run, but ultimately came up short as the Flames held steadfast to their lead to split the doubleheader 1-1 and go into a decisive game three on Sunday.

In the pivotal and series-defining game three, Oakland struck first again by scoring the first run in the opening inning. After a scoring drought that lasted the next three and a half innings, the Flames finally answered back with two runs of their own to take the 2-1 lead. These two runs ended up being the penultimate runs of the game, as the Flames carried that 2-1 lead to a 2-1 finish for both the game and the series, leaving out the victors.

The next time the Golden Grizzlies grace the diamond, it will be against the Northern Illinois University Huskies on Friday, April 15 at 2:30 p.m. in the Oakland Baseball Field.