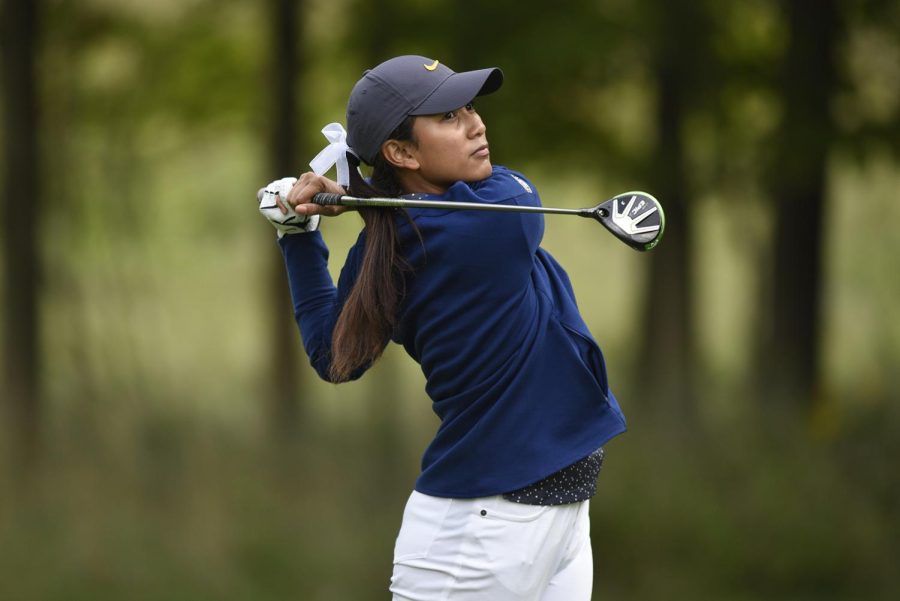 Amalia Shahzan finished second among Oakland golfers with a score of +5. Photo courtesy of OU Athletics.

The Oakland University Golden Grizzlies women’s golf team wrapped up their regular season with an eighth-place finish at the Delores Black Falcon Invitational in Bowling Green, Ohio, on April 9-10.

The Golden Grizzlies finished the tournament with the team shooting 57 over par, as freshman Nateda Her leading the team at +4, which was tied for 13th highest in the tournament. Graduate student Amalia Shahzan came in second among Oakland golfers at +5. With the Horizon League tournament at the end of the month, Oakland looked to improve on their 4th place finish at Cleveland State last month.

In the first day of the tournament, Oakland shot 57 and 322 as a team to come in at eighth place, as temperatures stayed in the low 40’s. The Golden Grizzlies weren’t alone, as none of the 11 teams in the tournament were able to shake the cold, with the leading University of Akron and Bowling Green State ending the day with a total of 307. Shazan and Her were two over to finish day one, but Oakland faced an uphill battle.

Day two saw much better temperatures as the Golden Grizzlies looked to make their climb. Her played up to her previous round as she remained two over as Oakland played 11 strokes better in the warmer weather. Unfortunately for Oakland, every team saw an improvement in their scores. Oakland’s better performance didn’t lead to a better position as they finished the tournament in eighth place in the standings.

The host Bowling Green State made the biggest jump in day two, as they were the only team to score sub 300 over the two-day tourney with a score of 288, and the only sub 600 team with a total of 595. Though tied with Akron after day one, Bowling Green State shot even as a team on day two, which gave them a 13 stroke lead over Akron, winning the Black Falcon Invitational, with Mackenzie Moore leading the way, shooting 1 under par for best in the tournament.

The Horizon League Championship takes place in Howie in the Hills, FL, on April 24-26. The Golden Grizzlies will look to take home the gold.