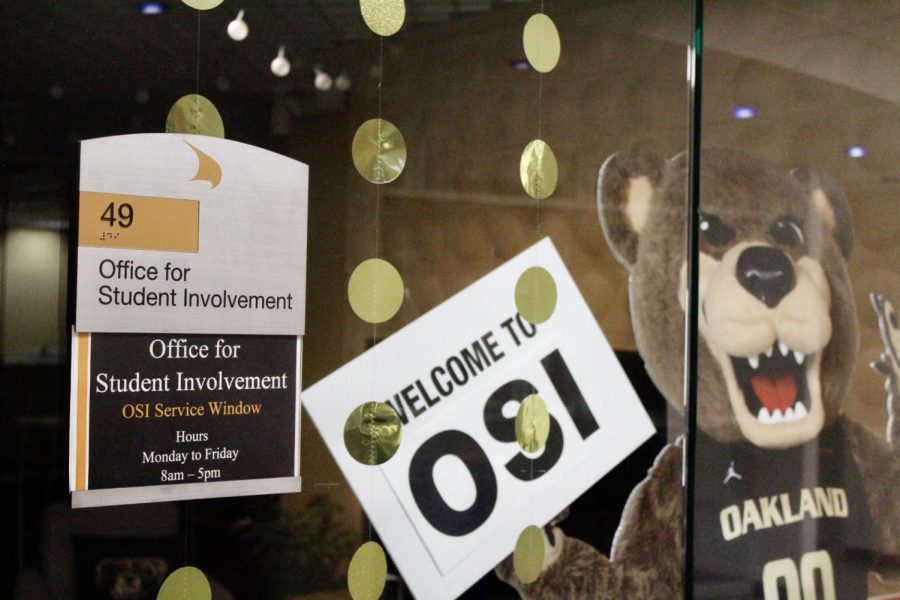 OSI and Student Affairs have been working on a unilateral restructuring of the student-led SAFAC orgs. The restructuring takes agency and independence away from student leaders and puts power in administrator's hands.

Changes are coming to the student-run Student Activity Fund Assessment Committee  (SAFAC) organizations and the Office for Student Involvement (OSI) in the 2022-2023 school year.

A significant restructuring of SAFAC that takes independence and agency away from student leaders and puts more power in the hands of OSI Senior Director Jean Ann Miller was announced to presidents of the SAFAC orgs in a meeting last Thursday.

The restructuring, which will be implemented over the summer, dictates that SAFAC orgs will no longer follow the leadership of democratically-elected student leaders in Oakland University’s Student Congress (OUSC), and will instead be under the direct supervision of university administrators in the OSI.

Under the proposed restructure, the SAFAC presidents will become a new group, entitled by Miller as the “OSI Programming Council.”

“SAFAC is coming under OSI,” Miller said. “It might [still] be called SAFAC, or right now it is being referred to as the OSI Programming Council. All [SAFAC presidents] will still be a part of that. It’s going to be co-led by [Coordinator of Leadership and Service Programs Daryl Blackburn], and myself. Daryl is going to do the leadership piece and I’m going to do the programming teams.”

Student Affairs and the OSI have apparently worked behind the scenes in recent weeks formulating the restructure. Student Body President Andrew Romano spends several hours meeting with Miller every week, and said he was not consulted at all about the restructuring of SAFAC.

“When [last Thursday’s SAFAC presidents] meeting was made, I asked [Miller], ‘What’s the meeting about?’” Romano said. “She told me she couldn’t tell me.”

“[The planned restructure] unilaterally ignores all the rules and agreements we have between Student Affairs, the Board of Trustees and the OSI,” Romano said.

“In general, if you want to change bylaws, because SAFAC’s bylaws are a part of [OUSC’s] constitution, [SAFAC presidents] have to agree with a majority. It might have to be a supermajority, so you’re talking six out of eight votes [from SAFAC presidents]. And then you have to have [OUSC] agree to it.

“And then every Oakland University student [has to be] given the opportunity to vote in a referendum and they have to agree to it. And then it comes to a constitutional change [that] the Board of Trustees is also asked to approve.”

The fact Miller is moving ahead unilaterally with the proposed restructure, without following the procedures outlined in OUSC’s bylaws or receiving approval from OU’s Board of Trustees (BOT), is especially troubling to student representatives in OUSC.

“My biggest concern is that … once you throw away rules, you open the door for anyone to break the rules and get away with it,” Romano said.

“The lack of accountability there is very concerning … It feels like every student right that we’ve been granted is being violated right now … Where do we draw the line of what rules they can break?

“Because if [they] can take away these rules for no reason, what other rules can [they] override? [It’s a] concerning door they’re opening. I don’t know how [Miller] has the authority to override the Board of Trustees who have granted [OUSC] these powers and our bylaws and constitution.”

SAFAC orgs are the largest student-run organizations at OU. They are organizations that have been historically designated by students as being important enough to receive small portions of the stipend of tuition collected from every student (currently $28.50 per semester) to perform specific tasks that serve the campus community.

The reasons given by Miller for restructuring SAFAC were budget cuts to the OSI. She explained during the meeting that positions such as assistant director and graduate assistant are being cut from the OSI, and that offices downstairs in the Oakland Center are going to be rearranged going into next year.

The apparent solution to OSI having less resources and staff is for the eight student-run SAFAC orgs to now come directly under their supervision, while also adding representatives from Resident’s Life Association (RLA) and OU’s fraternities and sororities to their new programming council consisting of SAFAC Presidents and other student leaders.

Miller and her staff insist that this new restructuring would allow for OSI staff to better support student leaders in the SAFAC orgs.

“I take responsibility for being woefully neglectful [with SAFAC training], especially last summer, in giving [SAFAC presidents] all the tools [they] needed to be successful,” Miller said.

The idea of more collaboration was appealing to some student leaders.

Questions raised during the meeting about why the proposed increase in leadership support would be impossible under the current model of SAFAC, which features more autonomy and independence for student leaders, went largely unanswered.

It appears that the plan for the new SAFAC/OSI council is to have an annually-selected student chair to serve in the role that OUSC’s democratically-elected student body presidents have traditionally served, acting as a liaison between the SAFAC presidents and the administration.

Details given during the meeting about the restructure of SAFAC were vague. This is apparently because, while trying to unilaterally enforce these changes before the semester ends and student leadership turns over in the SAFAC orgs, Miller and her staff haven’t yet figured out exactly how this new programming council is going to operate.

“The other thing that I’m [predicting] is probably having to write some new guidelines associated with [how the new programming council is going to] function,” Miller said. “One of the things I would like to see is a chair among the [SAFAC presidents]. It will be applied on a rotating basis. Each year somebody will get voted in for a year-long position as student chair … We need to look at the [established SAFAC guidelines] and then look at this model and see how we can incorporate both of them together.”

Another major issue discussed during the meeting was SAFAC orgs receiving their allocations of the SAFAC funds. To this point in the semester the university had withheld the transfer of those tuition dollars – a transfer that usually takes place in February every winter semester.

While Miller would not provide an explanation of what the hold up was, she did say that the money had been transferred to OSI last Monday and that all she had to do was transfer those funds to each individual SAFAC org. As of this writing, those transfers have not happened.

During the meeting Miller assured SAFAC leaders that allocations had not been changed, that SAFAC orgs would be receiving the correct percentages and that the orgs added to her new advisory council would not be receiving SAFAC funds.

“Nothing’s been touched in terms of the [SAFAC allocations],” Miller said. “[Each SAFAC org’s allocation] money remains the same percentages.”

Due to the funding questions revealed last fall about Miller soliciting and receiving tens of thousands of tuition dollars from the SAFAC orgs to fund the OSI, she made it a point during Thursday’s meeting to assert that the OSI was not receiving any more SAFAC funds under the proposed restructuring.

“To clarify, OSI is not receiving any of the [SAFAC funds] among these organizations,” Miller said.

Then immediately following the meeting with the SAFAC presidents, Miller kept the current chair of Student Activities Finance Board (SAFB), a SAFAC org that exists solely to fund GrizzOrgs, so she could tell him that he would be providing $5,000 from SAFB’s account to fund a recent event featuring comedian Preacher Lawson without other SAFAC presidents being around. This occurrence was consistent with the story that raised eyebrows last fall.

The context about how the SAFAC funds are distributed is important because Miller said during the meeting that going forward, her goal is to make SAFB independent of OUSC oversight. This action has precedent, as in recent years a similar move was made to give SPB independence from OUSC. However, SAFB’s operating independently of OUSC is controversial and was rejected by the student body when it was proposed formally in an OUSC election.

“When I first joined [OUSC] I was actually a big fan of the idea of SAFB being independent,” Romano said. “But your perspective changes when you actually work with SAFB and you talk to people working in SAFB … SAFB directly funds student organizations, so there’s a lot of back and forth between students reaching out to SAFB and SAFB controlling what student orgs do.

“The most important thing is that those people [running SAFB] have to be somehow tied to the students. So like the way Student Congress does elections, we’re all elected officials, that way people can file grievances.

“I think that’s a very democratic way to make sure that student orgs also have a say in how they’re funded. If you break off SAFB, then they’re not elected anymore by the students … There’s no way to tie them to an election and there’s no way to tie them to rules really … So when you start taking away the democratic process of it, they don’t really have any accountability from the students. Then it’s just the OSI controlling what they want.”

It was also stressed during the meeting that Miller wants to improve event programming — a goal which will be hard to accomplish with the recent budget cuts to OSI.

By moving SAFB out from under the supervision of student congress, OSI would be able to lobby for SAFB funds without having to consult democratically-elected student leaders in OUSC.

With SPB’s already established independence, if SAFB were made independent from OUSC then Miller would have easier access to 54% of the total SAFAC allocation, which is equivalent to hundreds of thousands of tuition dollars every school year.

While Miller didn’t say his name explicitly during the meeting, only referring to him by his title, it was made clear to the SAFAC presidents that Senior Vice President for Student Affairs & Chief Diversity Officer Glenn McIntosh supports this restructuring.