An update on renovations to the Oakland Baseball Field 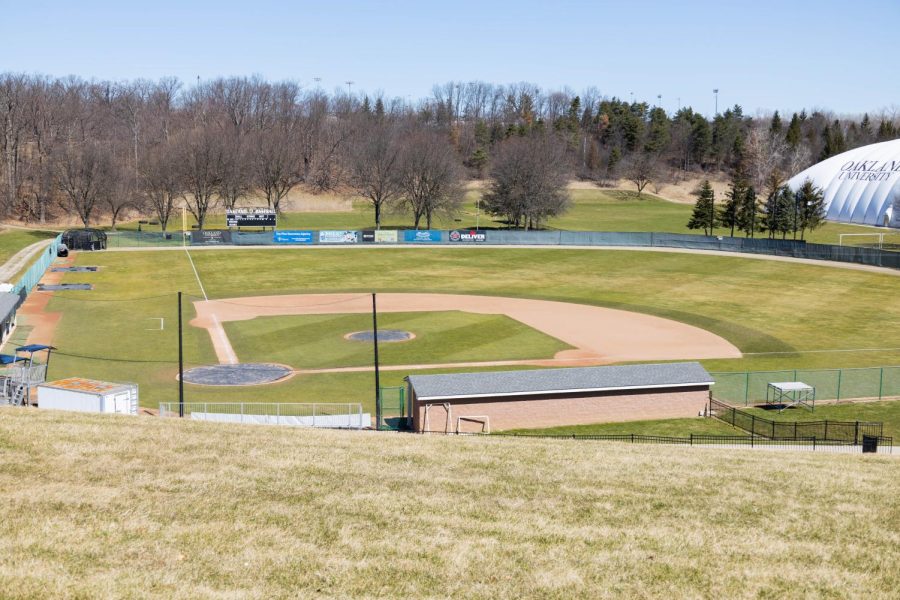 A plan to upgrade the Oakland Baseball Field is in the works.

The scene at the Oakland University baseball field over the last couple of years has often been a grim one. When the weather is good, so is the field’s surface — but when it isn’t, it’s a sloppy mess.

The field has been a topic of conversation for quite some time. In 2019, there was even talk of scrapping the baseball program altogether because of the field’s condition.

But Athletic Director Steve Waterfield was having none of that. Rather than scrapping the baseball program, he chose to invest in it.

“It’s more like we’re going to double-down on baseball,” Waterfield told Athletic Business. “I see a high percentage of us getting into the NCAA tournament, a really good recruiting base in our backyard and a long-time love of the sport in our area. The potential is there. We just have to get the facility right.”

“Steve is great,” Banfield said. “He and I have a great relationship. He’s obviously the guy that hired me — I think I was the first coach that he hired as Athletics Director.”

Later in 2019, the athletics department announced upgrades to the baseball facility. The dugouts have since been upgraded, along with a batter’s eye being installed in center field. But there is still much more work to be done.

A drainage system was installed as part of the renovations, but the field still floods whenever it rains, which makes it virtually unplayable. The field also currently doesn’t have lights, which means the team can’t play any night games at home. However, Banfield says that isn’t a huge concern for him at the moment.

“That’d be about third priority for me because it’s generally too cold most of time to play at night in the spring in the Midwest,” Banfield said. “But certainly once you get into May and stuff like that, yeah, it’s definitely part of it. Turf is priority number one, two and three though.”

Now in 2022, Waterfield has new plans for the baseball field. The Northwoods League, which is a collegiate summer baseball league, has reached out to the university to potentially share the field.

The process is still in its early stages. Waterfield said the university is currently working with an architect to figure everything out.

“The hope is that we can come up with a concept and then develop a business model that would allow us to basically pay for the stadium through revenue sources, donations, sponsorships, Northwoods league rental fees, etc.,” Waterfield said. “So that our team would have a new stadium and the Northwoods league would have games and it would work out for everybody.”

Assistant Athletic Director for Facilities Andy Adrianse said external fundraising will be a primary factor in getting these renovation plans off the ground.

“Sufficient funds for each project need to be secured before large-scale renovations can be completed,” Adrianse said. “Fundraising the past two years has exceeded previous fundraising marks for the baseball program, so it is moving in a good direction.”

Banfield says having a better field surface would “absolutely” help in recruiting.

“Everybody wants nice stuff,” he said. “Everybody wants to be wowed by nice stuff. But aside from that, like we can just tell them that they don’t have to spend their time getting a field ready for a game. How does it actually make us better? It lets us be on it [the field] more, it lets our guys be on it. And we don’t have to be there at 7:30 in the morning for a 1:00 game when it rains.”

Scheduled home games were never a given in years past. Entire weekend series were canceled. The team had to cancel a whopping nine home games in 2016.

The team has not had to cancel any home games due to field surface issues since Banfield took over the program in May 2020 [they had to cancel games last year due to COVID-19 issues].

“And that’s just mostly from us working harder at getting the field ready,” Banfield said. “My staff is out there hours and hours every day doing what we need to do to make sure we can play.”

Despite the condition of the field, Banfield said he’s not making any excuses.

“You don’t not have success,” Banfield said. “It’s a piece that’s a part of where we want to get to. But if we keep complaining about our field all the time, that’s just an excuse. You’re not going to hear it from us. But I know that if I do my part and we do our part to get the program on the right track, we’re going to continue to accelerate that [process] and have some success.”