‘King Richard’ displays the power of vision and persistence 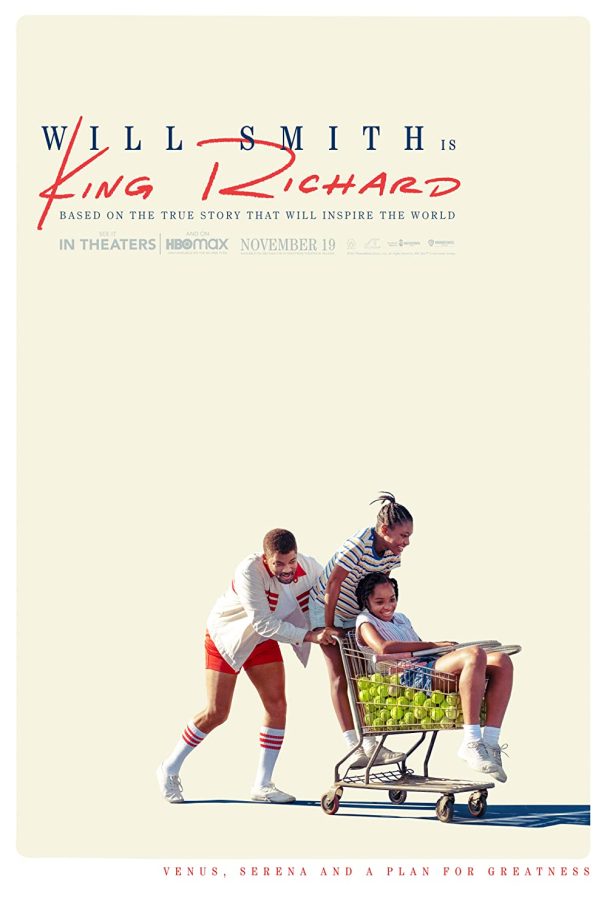 "King Richard" focuses on the upbringing of tennis stars Venus and Serena Williams.

“King Richard” follows the life of Richard Williams (Will Smith), his wife Oracene (Aunjanue Ellis) and his daughters Venus (Saniyya Sidney) and Serena Williams (Demi Singleton), showing the early days of these two youngsters as their father navigates their lives and prepares them for stardom.

In the past, I haven’t seen many sports films that focus solely on the adolescence of athletes, although I have always found it fascinating to see how athletes become the people they are today. An athlete’s persistence, struggle and failures lead to success within their sport, and this film displayed that for the William’s sisters.

From beginning to end, “King Richard” was entertaining. All of the characters had their own goals alongside their own struggles. I liked how the film presented two different periods in the characters’ lives, and showed how hard work can dramatically change a family’s life.

What made this film additionally great is that it focused on various relationships and the conflict and growth within them.

Taking place in Compton, California, one of the early scenes shows Richard practicing tennis with the girls on a low-end court, attempting to hone their craft. We often see Richard deal with rejection as no tennis club would accept his daughters, as tennis was a predominantly white sport, so they had to make do in order to work on their skill sets. Richard has a vision or “plan,” as he calls it, for his daughters that not many people see but him.

Richard — who feared too much playing would burn Venus out — didn’t want to take that path, and made it known how he felt. He constantly gave coaches a hard time with his antics, and in a sit down with agents, he made a fool out of them, making it an amusing scene.

Sometimes, when playing a sport at a high-level, athletes can be pushed too far. Their parents, coaches and agents push them to the brink, which can have dire consequences. Richard saw how detrimental this was, and he wasn’t going to let that happen to his daughters.

Richard wasn’t a perfect person by any means, he had his flaws, but he showed superb parenting characteristics. He made sure his daughters excelled in school — he and Oracene stressed the importance of academics. He instilled confidence, grit, persistence and a strong work ethic within them for their success. Richard also taught them the importance of being humble.

A common theme in this film is sacrifice. Richard and Oracene worked around the clock to support their children. Oracene worked during the day, while Richard worked nights. While Venus was training with a coach, Oracene took Serena to practice independently to ensure she was also getting training. Venus and Serena sacrificed their time where they could be participating in other activities to focus on tennis.

In my opinion, Oracene was an underrated character. She supported her family and held down the house while Serena and Venus were with Richard. She was tough, loving and supportive of her kids’ dreams while dealing with Richard — who was not always easy.

One thing that Richard constantly said to both Venus and Serena was to “have fun.” He always wanted his kids to enjoy their experiences playing tennis and not get lost in the pressure of the sport.  I loved this quality, because having fun when you’re a kid is vital, and it was awesome to see Richard make sure his kids were enjoying the process.

In one of the final scenes, at age 14, Venus goes toe-to-toe with the best player in the world. Even though she lost the match, she still won and gained a huge fan base, inspiring many young tennis players in the process.

Richard’s vision came to fruition as his girls achieved what he had always planned, and that was just the start. Venus and Serena turned out to be some of the best tennis players in history. They went on to win many titles in tennis and inspired many more.

Will Smith won an Academy Award for Best Performance by an Actor in a Leading Role for his part in this film, even though that isn’t what most people will remember most from his presence that night.