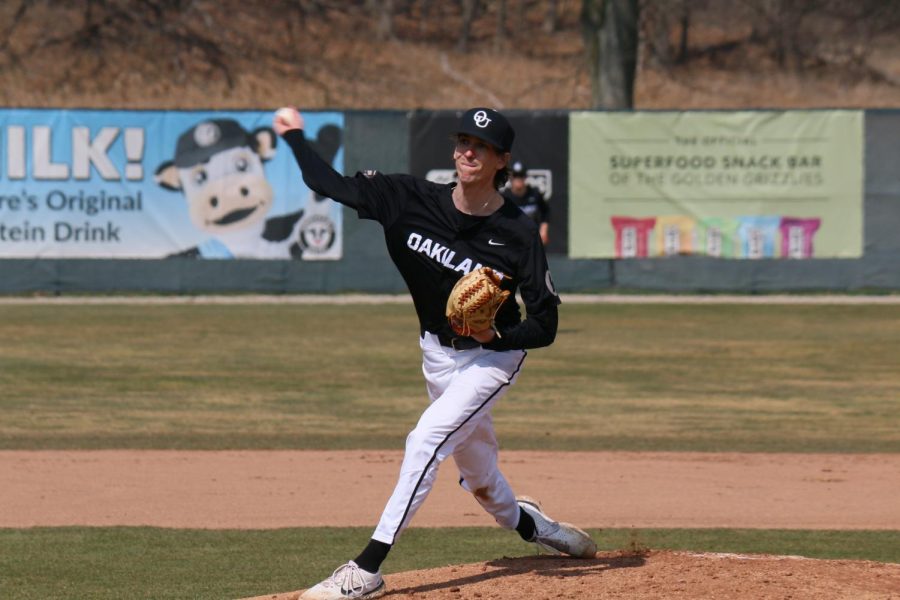 The bats were quiet in this one. The two teams combined to score just five runs on a total of nine hits. Luckily, Oakland tallied one more run than the Falcons to claim the tight victory.

Neither team was able to register a run through the first three innings of the game. Oakland’s Quinton Kujawa was mowing down the Falcon lineup with ease.

Kujawa pitched five innings of shutout ball, only allowing one hit in his time on the mound. Unfortunately, the stellar performance didn’t result in a win for Kujawa, due to the slow offensive start from the Golden Grizzlies.

“Getting [Quinton Kujawa] back out there was great,” Head Coach Jordon Banfield said. “He looked like his old self… just pounding the sliders for strikes, really competing, doing a good job.”

Brandon Nigh launched his sixth home run of the season in the bottom of the fourth inning, breaking the tie and giving Oakland a 2-0 lead.

Scoring continued to be hard to come by for both teams. The fifth and sixth innings were both scoreless on both sides.

Goulet made up for his throwing error in the bottom of the eighth inning. With Gabe Lux on base, Goulet singled, bringing home what turned out to be the game-winning run.

Nigh came out in the bottom of the ninth, shut the door on any Falcon hopes, and registered the save.

Banfield was pleased with the result, but he felt like he had a pretty good idea of what gave the Grizzlies so much trouble at the plate.

“[We] took some good swings off their starter, we were lining out a bunch,” said Banfield. “They brought in a reliever — kind of a low-angle right-handed guy that gave us a bunch of problems, really probably should’ve got our left-handed hitters in there.”

It didn’t look pretty, but Banfield was able to recognize that a win is a win no matter how it looks.

“Not our best game for sure,” Banfield said. “But anytime you win it’s good. It’s probably a good sign that we can get a win now and not play our best.”

With the win, Oakland improves to 14-13 overall on the season. The Golden Grizzlies have won seven of their last eight games and are sitting comfortably in second place in the Horizon League behind Wright State.

Oakland seems to be figuring some things out, as it is now over .500 for the first time since late February.

Oakland will host Northern Illinois this weekend in a three-game series. The Huskies are sitting at just 6-22 overall this season.