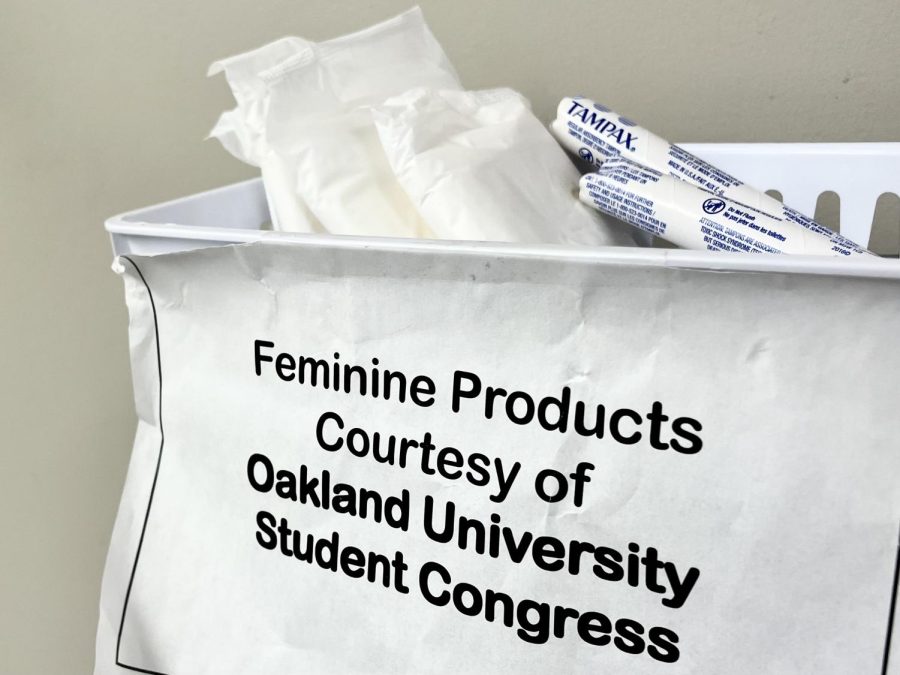 Student Congress has partnered with other student leaders and administrators in Student Affairs to get free period products in bathrooms around campus.

The menstrual products will be available in housing buildings and products already available in the Oakland Center will have new dispensers. Additionally, there are plans to install dispensers in high traffic academic buildings in the fall.

These buildings include the Kresge Library, Pawley Hall, Elliott Hall and the Human Health Building.

“VP Macintosh was able to help us get the ball rolling in terms of getting dispensers in the Oakland Center, getting products in the housing desks, as well as installing dispensers in a few high traffic buildings,” Farooqi said. “He was empathetic to the cause and definitely brought our spirits up when we were talking about the various things we wanted. His overall response was that a lot of the things we wanted — like products at housing desks, in the OC bathrooms in dispensers and dispensers in buildings — were all things that were very doable — which was kind of a shock to us after having spoken to other people in administration that pretty much told us the complete opposite.”

Without the assistance from Macintosh, there was fear from OUSC that distribution would never occur. OUSC has struggled to get approval for this initiative for some time. Romano said that he was surprised by the pushback he received from housing and maintenance faculty.

According to Farooqi, Housing Recruitment Manager Jenn Bonardelli told OUSC that providing free menstrual products was not a possibility because university housing is not permitted to distribute bandaids, pain medication, over-the-counter products or any other health-related products.

“[The] argument from housing [was] that they aren’t allowed to distribute medical related products,” Farooqi said. ‘Tampons and pads are somehow medical but toilet paper is a-okay.”

Both Romano and Farooqi also had regular contact with Director of Facility Services, Douglas LaLone who relayed to them that he needed a guarantee that OUSC would be able to permanently provide the products and also be willing to refill the dispensers on campus.

“[LaLone said] he [would] bring [the matter] to the Vice President of facilities to determine all of the stakeholders involved,” Farooqi said. “LaLone also said that they also need to check with the legal department to see if there are any legal liability issues providing these items.”

“[It was] very confusing for us because we already do it in [the OC],” Romano said. “The weirdest part about this whole thing is they used to sell [menstrual products] in the bathrooms two years ago, so giving them out for free should not be a legal liability.”

LaLone told The Oakland Post that he has not spoken to the legal department because they did not respond to his original request.

“When OUSC first did this back in 2017 it took a week for them to get approval to do it in the OC and that was that,” Romano said. “We didn’t think we would have all of these controversies, especially since we have shown that we can do it— we’ve done it for five years now [in the OC]. We didn’t think it would be so controversial to do it in more buildings.”

After much debate with university administrators, the OUSC have managed to overcome various obstacles through partnership in order to accomplish the shared mission of supporting OU students by providing increased access to menstrual products.