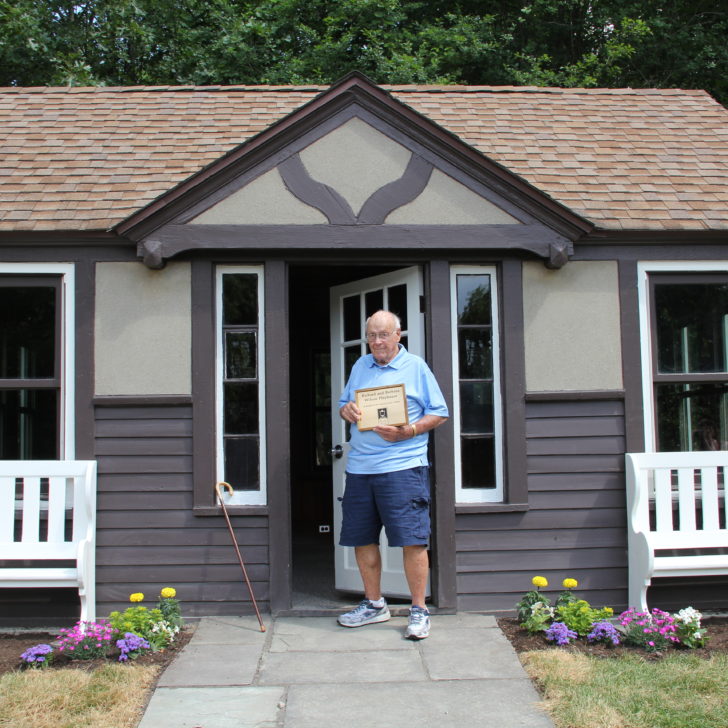 As first reported on Meadow Brook Hall’s website, Richard Wilson — son of Matilda Dodge Wilson and Alfred G. Wilson — died in February 2022. Richard was the last direct heir to Matilda and the last child who grew up at Meadow Brook Hall.

Richard obtained his Bachelor of Science in Agricultural Economics from Michigan State University (MSU) in 1951. He also spent the early parts of his career working with his older sister Frances at her horse racetracks in both Michigan and Florida.

Later in his life — once Meadow Brook Hall became a museum — Richard spent time at the Hall during special events, often talking about his stories at Meadow Brook as a child. Richard had often spoken about what it was like growing up in an American castle.

“It was a wonderful place to grow up. We rode horses, hunted pheasants and deer, swam and did just about anything we wanted to do. I really liked the hidden staircase — leading from Mr. Wilson’s room to the lower level — as a kid. I would get my friends in there and turn out the lights. It was pitch dark. I’d scare the heck out of them. I thought that was great fun,” Richard said to OU Magazine in 2004.

Richard loved to remain connected with the Hall and in an 1998 Oakland Post issue said, “My only connection with Meadow Brook now is through my heart.” He volunteered for fundraisers such as the Meadow Brook Concours d’Elegance, and staff such as curator Madelyn Rzadkowolski described Richard as “introspective,” “humble” and “hilarious.”

Meadow Brook has plans to honor the memories of both Richard and his sister Barbara on the property. With the construction of the Visitor Center for Meadow Brook on the horizon, big plans are set to honor the Wilson family and legacy through it.

The legacy of the Wilson family started when the family first got involved with OU. In 1957, Matilda and Alfred donated the estate, its accompanying buildings and $2 million to MSU to establish what is now Oakland University.

Wilson wanted to show her commitment to the school early on, as she gifted every person of the first ever graduating class a diamond ring. Wilson went beyond OU in terms of community involvement, and she became the first female lieutenant governor in Michigan’s history.

Matilda’s generosity was a prominent characteristic of her personality, and an excerpt titled “The Responsible Philanthropy of Matilda Dodge Wilson” is available online. Meadow Brook Hall consistently tries to continue the wishes of the Wilson family.

“Meadow Brook Hall remains committed to education with museum programming; summer camps; hosting classes and free tours for OU students; internships; preservation of natural resources and land with our all-volunteer Garden Club supporting the gardens; woods and rare plants and trees on site; equal rights for all and access to voting and government and helping those in need,” Rzadkowolski said. “We can always do better and try harder, and we are incredibly inspired by the Wilsons’ interests in these issues, plus fighting for peace, civil rights, healthcare, safe and affordable housing.”