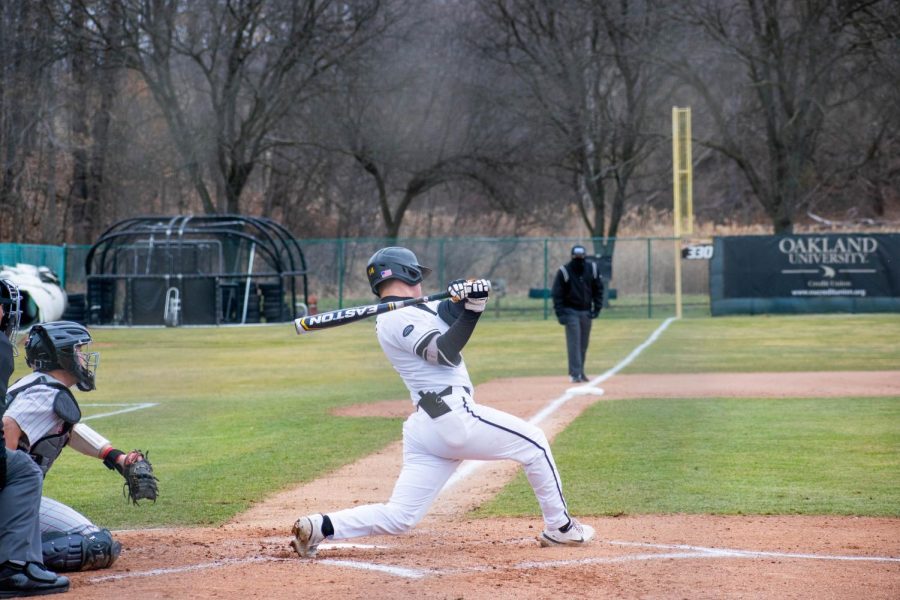 Gabe Lux follows through on his swing in an at-bat against Youngstown State last weekend.

The Golden Grizzlies baseball team played a weekend series consisting of three games against the Youngstown State Penguins last weekend at the Oakland Baseball Field, and it resulted in a 2-1 victory with a showing of complete dominance from the Golden Grizzlies in the last game.

In the first meeting, the Golden Grizzlies dominated the Penguins with their consistent offense and tremendous pitching, winning with a score of 11-6. Redshirt junior pitcher Brett Hagen won his second consecutive start with this game, notching three strikeouts and allowing three earned runs on just four hits over his five innings pitched.

This win shifted the Golden Grizzlies record back to 12-12 [a .500 record], and improved them to 5-2 in Horizon League play. This game also marked the team’s fifth consecutive game of scoring double-digit runs, while also marking the fifth consecutive win for the Grizzlies.

The second game of the series didn’t go so well for the Golden Grizzlies, as the Penguins ended their five-game winning streak after a close 4-2 victory. This loss dropped the Golden Grizzlies to 12-13 on the season, while the Penguins improved to 10-16. The game started off rather slow, as neither team was able to crack the ceiling on the scoring board.

Both teams then scored two runs each, keeping the game leveled at 2-2 before the scoring drought resumed for another three consecutive innings. The Penguins were the only ones who were able to figure out a way to get free from their offensive funk, scoring a single run over both the eight and ninth inning to take the lead and end the game with the win, notching a score of 4-2.

The final game of the series played out exactly how the Grizzlies wanted it, as they proceeded to dominate near the middle of the game and make program history with their Sunday win. The game started off slow, with both teams remaining scoreless throughout as was the case with the second game, but the Grizzlies shifted the tone of the game after their amazing fifth inning performance.

The Golden Grizzlies tied a season-high, notching 14 runs on their 16 hits with six of those runs coming in the fifth inning. These six runs opened up the game for the rest of the Grizzlies offense, ending the pitcher battle that was taking place between Penguins’ pitcher Matt Brosky and Grizzlies’ pitcher Travis Densmore.

With their sixth win in seven games, Oakland moves back to a .500 record [13-13, 6-3 on the season and in Horizon League play, respectively]. This series victory means that the Grizzlies have opened up the season with three consecutive series wins, which is the first time the Golden Grizzlies have notched this milestone since becoming a Division I program.

The next time that the Golden Grizzlies return to the diamond will be a faceoff against the Bowling Green Falcons at the Oakland Baseball Field in Rochester, Michigan at 2:30 p.m. on April 5, prior to leaving for a three-game road trip series against the UIC Flames.