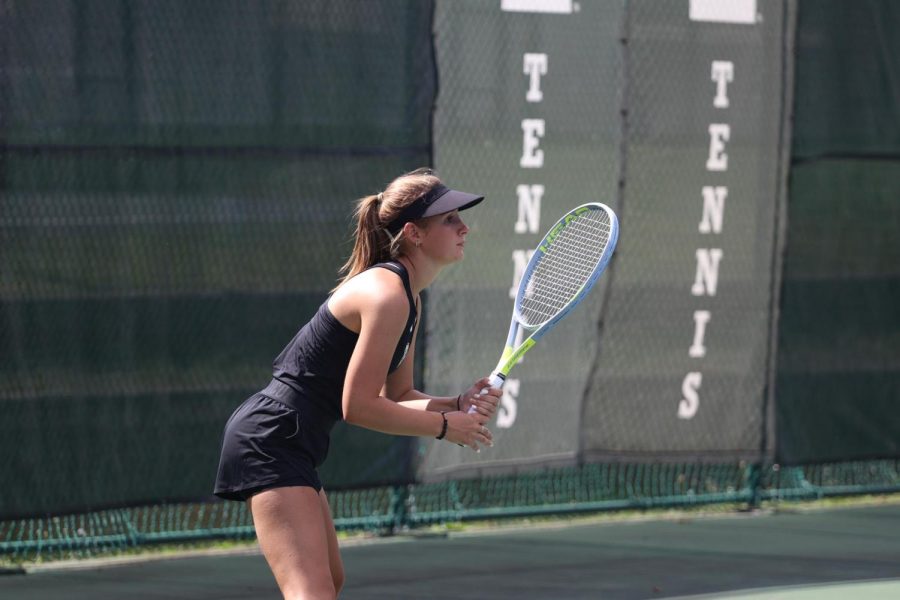 The Oakland tennis team lost to Youngstown State on Sunday to fall to 0-2 in conference play.

The Golden Grizzlies’ tennis team dropped their third consecutive road game on Sunday in Youngstown, Ohio, losing the game to the Youngstown State Penguins by a score of 5-2.

Despite the loss to the Penguins, there were multiple silver linings shown during the weekend stretch of games for the Golden Grizzlies tennis team, including Liza Mladentseva and her perfect weekend.

Following the 1-6 loss to the Cleveland State Vikings last Friday, the Golden Grizzlies went into Sunday’s match with a purpose and vision and started off executing that vision to perfection. In what is seemingly becoming the norm for this duo, Yasmin Glazbrook and Nirva Patel put on another great doubles performance.

These two dominant victories allowed the Golden Grizzlies to capture their doubles points in the first and second place spots, getting them off to a great start. This success, however, started to wane and dissipate during the very close singles matches that were to follow.

In one of the matches that wasn’t close, however, Mladentseva turned in a great performance, beating her opponent in both sets with a score of 6-2 and completing a “perfect weekend” with wins in both her games played. Then in a twist of fate, the games following her dominant performance spelled disaster for the Golden Grizzlies’ overall hopes of victory.

Milano dropped her match with scores of 6-2 and 6-0, going before a string of two very close matches to end the meeting. In the number five singles position, Tegan Heaton took her opponent to a riveting three-set match after winning the first set but would fall just short of the victory in the final set [the final scores were 7-5, 6-3, and 6-3].

In the last game of the day, at the number six singles spot, Emma Hultqvist took her opponent into extra time during the first set, but would fall in straight sets with scores of 7-6 and 7-5 despite her clear-cut tenacious play. The one doubles loss and these singles game losses culminated in a 2-5 loss to the Penguins for the Golden Grizzlies, extending their current skid of losses to three as they fall to 0-2 in Horizon League conference play.

Despite the current skid, the Golden Grizzlies still have many accomplishments and milestones to be proud of. Their bursts of dominance and overly-tenacious playstyle have shown that they are still capable of beating any team on any day, and it looks like they will get a chance to create some momentum heading into the final stretch of the season.

The next time these ladies step on the courts will be to face off against the Notre Dame Fighting Irish for the first time in the program’s history, on April 10 at 5 p.m. in South Bend, Indiana.