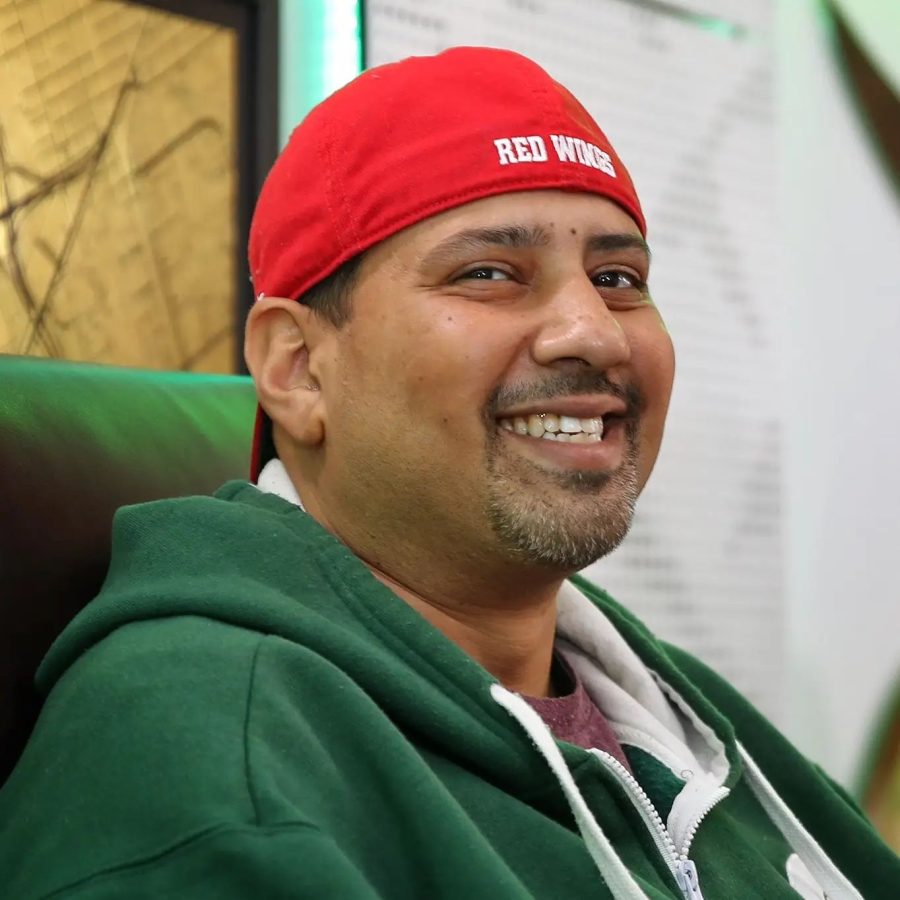 Known for his love of food and Detroit sports, Andy Isaac has become a huge figure in the Detroit area. Fans have grown to love him for his goofy banter and his food and snack reviews.

Isaac, 42, grew up in Sterling Heights, Michigan but currently resides in Troy. A graduate of Michigan State, his brand of sports talk and authentic humor have made him one of the most likable figures in Detroit sports media.

Isaac’s love of sports started at an early age, mainly his love of basketball.

“When I was little I was very into sports,” Isaac said. “My parents were immigrants and basketball was big in Egypt, so was soccer, but I was never into soccer as a kid and I was very into basketball. My dad really loved the Pistons, so much so that… we used to listen to games on the radio together a lot, which was great. I think it was a really good bonding experience for us.”

Isaac’s journey into the world of digital media may be seen as a bit unconventional in today’s media landscape, but when he got his start in the mid 2000s, things were much different.

“I started out not in digital media,” Isaac said. “I was doing personal finance and stuff. And then oddly enough….you have to think about this as how digital media was kind of constructed in the early 2000s. A lot of people had personal blogs and stuff and that’s how a lot of us got our start.”

Isaac’s blog underwent quite the evolution from there. It started out as updates about his personal health, but it transitioned to his thoughts about Detroit sports and pop culture.

“At the end of 2006, I got diagnosed with Hodgkin’s lymphoma,” Isaac said. “So I started this cancer blog pretty much to update my friends who lived all around the country. So I started this blog as opposed to just emailing people with updates. I would keep just like a simple blog. And it started out as just updating people on how my treatment was going and how I was feeling and then it kind of evolved from there into me writing about sports, especially Detroit sports and pop culture things. And it evolved even further from there.”

Isaac has gained a huge following on Twitter [@WorldofIsaac], currently amassing almost 67,000 followers as of writing this. As far as how this has happened, Isaac said it was simply a case of right place, right time.

“I think a lot of people who are big on these social media platforms get in at kind of the genesis of the platform,” Isaac said. “And it was a lot easier to acquire users. I’m not saying that I wasn’t interesting or didn’t have cool things to say and to share. But I also was very lucky in that I got into Twitter when there weren’t as many users.”

One of the things that has shaped Isaac’s personality and his social media presence has been his love of food. It started with his blog, and has continued to be a huge part of who he is.

“I’ve really leaned into the food stuff because I wanted to highlight a lot of the places in Michigan,” Isaac said. “A lot of people I don’t think knew how much Michigan had to offer in terms of different kinds of food. And if you follow me a lot, you know that I like to visit Dearborn because there’s a lot of different Arabic food there. And I just think it’s good to highlight some of the positive things we have in this area.”

Issac’s has used his love of food to create an unofficial holiday of sorts. Every Saturday, in his world, is now Faturday, although he can’t take credit for the term itself.

He said it was kind of a joke at first, but has spawned into a way of life.

“I had been saying that Saturday was a cheat day,” Isaac said. “And Saturday was a great day for people to just go out and find different food places. And then I remember somebody responding, ‘Yeah, it’s not it’s not Saturday, it’s Faturday.’ Initially if it was just a hashtag and just something that we joked around about on Twitter especially, and then you know, you know, like it just became like a bigger thing and like, I made some t-shirts and people bought t-shirts and it was very fun.”

“The mantra of ‘Saturday as your cheat day.’ really, really caught on with a lot of people,” Isaac continued. “Especially people who like to eat really well during the week and just want that cheat meal or that cheat day. And I love it. And I really think it could probably get bigger.”

As mentioned earlier, Isaac was diagnosed with Hodgkin’s lymphoma in 2006. Despite having one of the highest survival rates among all cancers, Isaac has relapsed on it several times since diagnosis.

“They say that Hodgkin’s is ‘the good cancer to have,’” Isaac said. “Hodgkin’s, even back in 2006, had a very high survivability. You know, it was 85-90% I think back then, unfortunately for me, I relapsed after initial treatment and then I had to get a stem cell transplant in 2009. And I relapsed after the stem cell transplant. So they categorize my Hodgkin’s as something called refractory Hodgkin’s lymphoma. It’s kind of like a relapsing recurrent. Basically, you treat it and it comes back and you treat it again and it comes back. So that’s the unfortunate part of my disease.”

Isaac said he’s currently on an immunotherapy drug that is normally not prescribed for Hodgkin’s.

Last year, Isaac started doing some work for Woodard Sports. He started by doing a video series called “Isaac Eats,” where he highlighted different restaurants and eateries in the greater Detroit area.

He’s also helped them with their social media content, as well as some behind the scenes stuff. Isaac said he doesn’t have the time to do more stuff with Woodward Sports, but acknowledges the importance of media outlets like them.

“I really think places like Woodward Sports are very important to the fan culture in cities,” Isaac said. “You need these alternate places for fans to grow. It can’t just be all straight print journalism.”

As far as what’s next for Isaac, he said everything depends on his health.

“It’s hard for me to project where I’m going to be in the future because of that,” Isaac said. “I really hope that one day I’ll be able to get back into making food videos and I think not only do I enjoy them, but I think people also enjoy them. That’s the hope— fingers crossed that I start to feel better and can start making videos on a more consistent basis.”