Baseball routs SVSU behind monster days at the plate 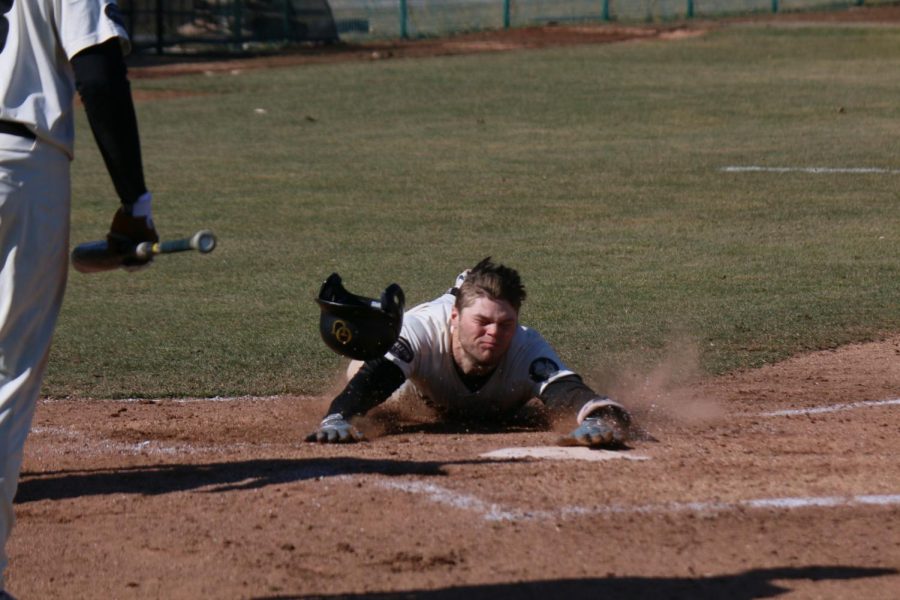 The Oakland baseball team defeated the Saginaw Valley State Cardinals, 13-2, on Tuesday afternoon at the Oakland baseball field. Oakland scored at least three runs in each of the first three innings to put the game well out of reach early.

SVSU struck first in the top of the first inning. The Cardinals loaded the bases with one out and SVSU’s Tucker Roe beat out a double play to bring a run home. Starting pitcher Chas Sagedahl struggled early for the Grizzlies, but settled in later in the inning and only gave up one run.

Brad Goulet quickly tied things up in the bottom of the first inning with a solo home run. Michael Stygles then connected on a three-run home run a few batters later, giving Oakland a 4-1 lead.

Seth Tucker laid down a near-perfect bunt to lead off the second inning. The center fielder then advanced to second base on a balk, and stole third and scored on an error.

Brandon Nigh continued his recent hitting groove in the bottom of the second inning with a two-RBI single to extend the Grizzly lead to 7-1.

Cam Post then blew the game open with a two-RBI single, making the score 12-1.

Oakland went scoreless in the fourth inning, but in the fifth inning, Post reached on a hit by pitch. He then stole second, and advanced to third on an overthrow and scored on a passed ball, extending the lead to 12 runs.

Both teams went scoreless for the next two innings, as Hunter Pidek came in for Oakland and shut down the Cardinals’ offense.

The Cardinals were able to scratch another run across in the top of the eighth inning on a sacrifice fly from Jeffrey Rese, but the game had already been decided.

“We jumped all over them, and that’s what we feel like we should do against a one-level-down program,” said Head Coach Jordon Banfield. “We got every position player into the game, minus two regular starters that didn’t start, just to get them some rest. And we got all the young guys in there, and those games are valuable.”

Banfield went on to explain why these types of games are so valuable.

“[These games] are valuable,” Banfield said. “No. 1 because there’s a chance to get guys in if you can take care of business, and No. 2 is because when they hang with you, which inevitably happens sometimes, it’s good to show up and make sure the guys always play the right way.”

Oakland followed up the big victory over SVSU with a statement win in Ann Arbor over Michigan the following day. The Golden Grizzlies now sit at 11-12, and will hit the road this weekend to take on the UIC Flames in Chicago.