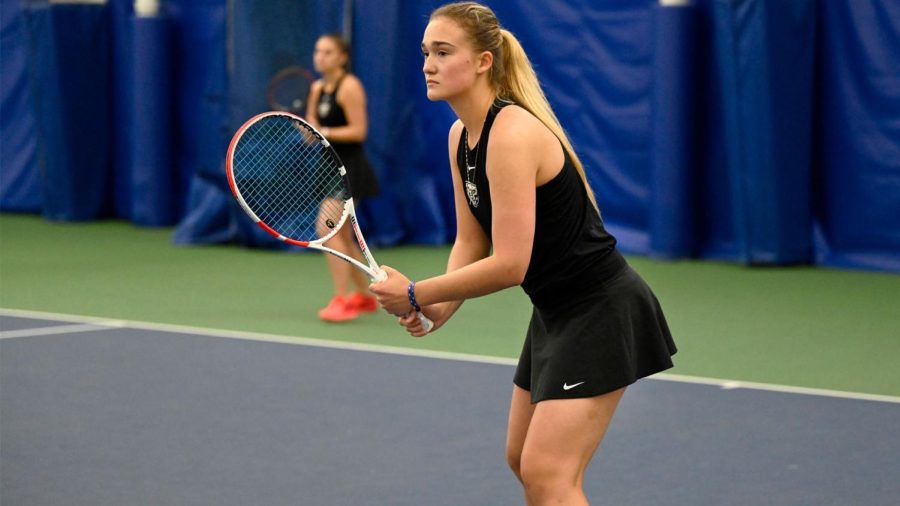 Liza Mladentseva was a standout player for the Golden Grizzlies, earning the team their only point of the matchup. The talented freshman, playing in the number one singles spot, beat the Vikings’ Oihane Vicario 2-0 (6-2, 7-5).

This win in the number one singles spot brings Mladentseva’s season record to 5-3, an incredible feat for the tennis athlete’s first year with the Golden Grizzlies.

Mladentseva continued to shine in the number two doubles spot when paired with Jillian Milano. The dominant duo overpowered the Viking pair of Selma Tounsi and Bethany Yausch with a 6-2 win.

The doubles pair of Mladentseva and Milano has shown a lot of promise as their season has progressed. Following their win against the Vikings, the team now holds a winning record of 3-1.

Milano also had a good showing in the number four singles spot. The redshirt senior stole the first set from Selma Tousi 6-4.

Tousi put up a good fight for the Vikings, winning set two with a score of 6-3. In the tie-breaking set three, Milano lost a close battle, dropping the set with a score of 7-6 in favor of Tousi.

Oakland’s number five and six singles players, Tegan Heaton and Emma Hultquist, followed Milano in a similar fashion. Both players managed to win the first set of their match, before dropping the final two to the Vikings.

In the number two singles spot, Yasmin Glazbrook fought hard for the Golden Grizzlies. The senior athlete dropped her first set to Klara Mrcela 3-6, before powering back to win the next set with a score of 6-2.

In a third-set battle, Glazbrook fell just short of winning the match, losing the third set with a score of 6-4 in favor of Mrcela.

The number one and number three doubles teams for the Golden Grizzlies had identical showings.

The number one duo of Yasmin Glazbrook and Nirva Patel faced the Viking pair of Klara Mrcela and Sima Heren. The Golden Grizzlies lost their match with a close score of 4-6.

Meanwhile, the number three doubles team of Tegan Heaton and Emma Hultqvist went against Oihane Vicario and Tereze Vevere of the Vikings. The Oakland duo also lost their match 4-6.

In the number three singles spot, Nirva Patel struggled against her competitor, Sima Heren. The junior lost both sets to Heren, scoring merely two points each (2-6, 2-6).

Despite the Golden Grizzlies’ tough loss to the Vikings, they leave the matchup carrying a respectable 6-6 season record.

Oakland will play their next match at Notre Dame at 5 p.m. on April 10 in South Bend, Indiana. Oakland looks forward to strong competition against the Fighting Irish, a team that has a 7-4 record on their home turf this season.