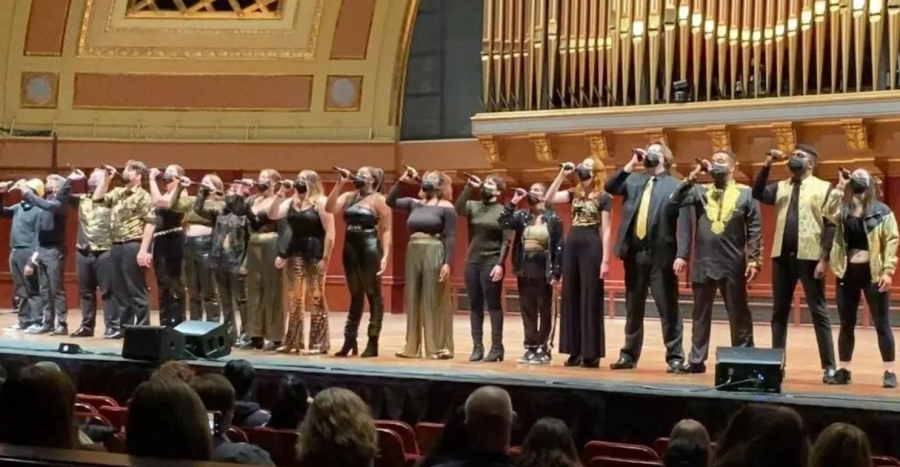 Gold Vibrations, an Oakland University A Cappella group, has a passion for performing, as well as an affinity for sparkly gold outfits.

Gold Vibrations is one of OU’s performance groups. Started in 2009, they are not associated with the School of Music, Theatre and Dance. They perform several times throughout the year with concerts, competitions and gigs around campus.

“We have an unconventional e-board,” President Jazz Pittenger says. “I joined the group my freshman year. I helped out a little with social media and stuff. I became the president my sophomore year, and this year is my second year as president. We have extra positions than most groups.”

Pittenger says there are many positions in the group, including a music director.

“Competitions are once a year — the same one that they do in ‘Pitch Perfect,’ ICCA.” Pittenger says. “We start the process of choosing songs in September, and the competition is typically in January or February.”

The performance schedule for the year depends on the amount of gigs and events around campus throughout the year. The group has one concert each semester — one in December and another in April.

“Then we perform at Quarterfinals, usually in January or February,” Pittenger says. “If we place high enough, we go to the Semifinals, which would be another performance. Other than that, we have different gigs. It depends on the volume in which we’re booked.”

Gold Vibrations used to rehearse in Varner, until the COVID-19 pandemic happened. They are currently going back and forth between rehearsing in the Oakland Center and rehearsing at University Presbyterian Church, located on Adams Road.

“Up until last year, we met in Varner to rehearse. During COVID we rehearsed in the parking garage. Now we go back and forth between the Oakland Center and University Presbyterian Church because they’ve offered us the space to use if we need it,” Pittenger says.

The A Cappella group performs many different genres of music at their concerts. They mostly perform pop and funk songs, but they also perform jazz and soul songs. Their repertoire includes Billie Eilish, Lawrence and Sammy Rae and the Friends.

Auditions for the group are held at the beginning of every fall semester and there are auditions for every vocal part.

“The best way to learn about audition details is by following our social media, or our table at grizzfest. We do a lot of promotional stuff in those two places,” Pittenger says. “We usually do open audition parts for every vocal part, soprano, alto, tenor and bass, as well as beatboxers.”

Gold Vibrations is currently rehearsing for two big events to round out the school year. They are opening for Tai Verdes and Peach Tree Rascals for OU’s Spring Concert on Sunday, April 3. They also have a concert on Saturday, April 16.