Baseball goes to Ann Arbor and cruises past Michigan 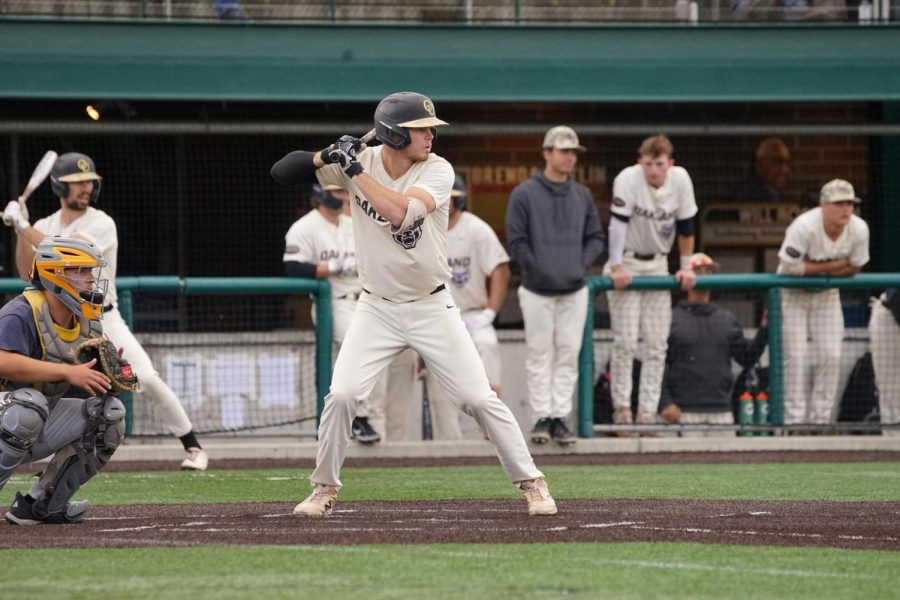 Brad Goulet had four hits in six at-bats against Michigan on Wednesday.

The Golden Grizzlies traveled an hour southwest of campus to take on the Wolverines in a midweek matchup. Perhaps Michigan underestimated the Golden Grizzlies, but it was clear that Oakland didn’t make the trip just to bow down to Michigan.

“We’re not going [to Michigan] to lose,” Banfield said. “We just got to go out, play our game and show we belong.”

And that they did. Oakland jumped out to a 6-0 advantage over Michigan in the first inning and never looked back.

The Golden Grizzlies batted around the order in the top of the first inning, registering six singles. Seth Tucker, Brad Goulet, Brandon Nigh, Michael Stygles, Jared Miller and Brandon Heidal all recorded hits in the first inning as Oakland forced a Michigan pitching change before the Wolverines even had a chance to bat.

Nigh, a freshman who leads the team in batting average, launched an opposite field home run in the bottom of the second inning to extend the Grizzlies’ lead to seven runs.

“What [Nigh] is doing is pretty impressive,” Banfield said. Despite Nigh being the youngest player on the team, Banfield says he was “physically ready” to make the transition from high school to college.

Oakland’s starting pitcher Travis Densmore gave up a solo home run in the bottom half of the second inning, but Oakland’s offense had already built a comfortable cushion.

The Golden Grizzlies jumped all over the Michigan pitchers again in the third inning. Miller and Thomas Green each recorded triples, and Oakland found itself with a 9-1 lead after the top of the third inning.

Michigan added three more runs in the bottom half of the third inning, but it was nowhere near enough. Oakland had already established its dominance over Michigan.

The Golden Grizzlies added a total of five runs in the fifth and sixth innings. Oakland led, 14-4, through six innings of play.

The Wolverines added three runs in the bottom of the seventh inning, but it was all a moot point. Oakland clearly was the better team on this day, and the Golden Grizzlies walked out of Ann Arbor with a 14-7 stomping of the Wolverines.

“The most exciting thing for me was that we showed up, from the time we got off the bus, and we acted like we belonged out there,” said Banfield. “We didn’t do that earlier in the year against teams that weren’t nearly as good as Michigan.”

The Golden Grizzlies are playing very good baseball as of late. They have scored at least 10 runs in each of their last four games, and Banfield said it all goes back to confidence.

“Our guys are just getting some confidence that they belong,” Banfield said. “And I get it. I’m getting some too to be honest. When we show up, [we] make other teams know that they got to play good to beat us, and even if they do, they still might not.”

Banfield says the win is not only good for the program, but for the players, too.

“It was great to see,” said Banfield. “Great for our guys, great for our kids, they deserve it.”

Oakland, now 11-12, will look to keep confidence sky-high as it hosts Youngstown State this weekend.