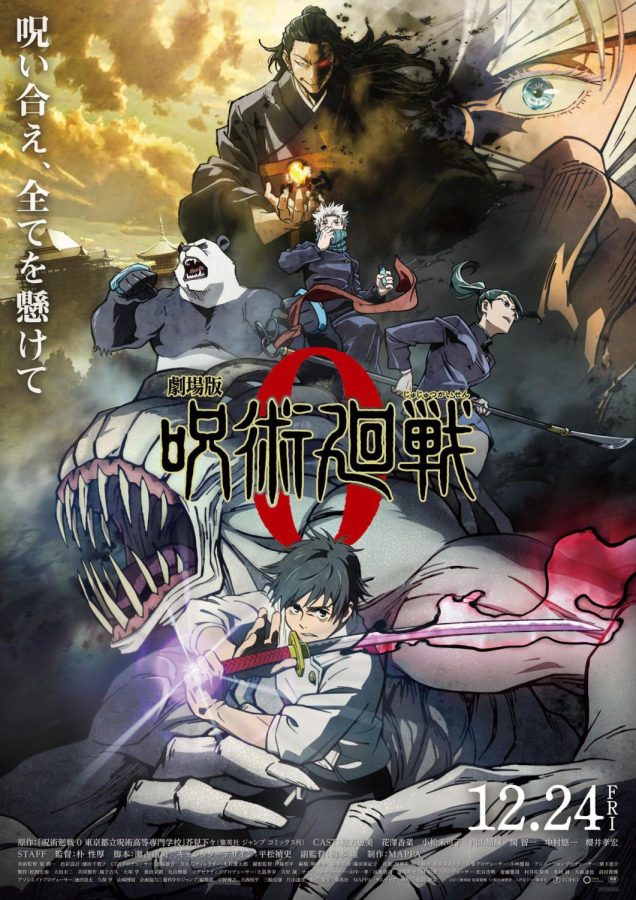 After watching “Jujutsu Kaisen 0,” I can confidently say I will be watching the TV series based on the manga “Jujutsu Kaisen.” The movie was a short and enjoyable watch that did a great job of recreating the magic of the TV show — the little bit I have seen of it.

The manga is centered on the idea of living things having a cursed energy which they cannot control. The cursed energy then leaves their body and creates curses that Jujutsu Sorcerers — people who can control the cursed energy in their bodies — must defeat.

“Jujutsu Kaisen 0” is a prequel to the TV show — approximately a year before the show — and follows Yuta Okkotsu (voiced by Megumi Ogata) who is cursed by childhood friend Rika Orimoto (Kana Hanazawa), who promised marriage to Yuta but passed away when they were children. Yuta is recruited by a very powerful sorcerer Satoru Gojo — Yûichi Nakamura — to attend Jujutsu High School.

The song that accompanies Yuta as he begins his journey at Jujutsu High School was lovely, and what started as a soft, enchanting song slowly became extremely energetic as it finished. It really captures the pace of the movie and Yuta’s journey — a reserved kid who learns to control the curse and become a strong sorcerer himself.

From that point we meet Yuta’s fellow first-years — Maki (Mikako Komatsu), Toge Inumaki (Koki Uchiyama) and Panda (Tomokazu Seki) — who are all different types of sorcerers in their own right. I really liked the chemistry between all four of them, and watching them all grow together as individuals and as a team, albeit a classic trope, was still very enjoyable.

The first time we see Yuta in action is with Maki, and it is to exercise a curse from a school — which is later found to be set up by the big bad of the film Seguru Geto (Takahrio Sakurai). This is also the first time we see Rika act as a curse, and she is absolutely terrifying, extremely powerful and looks awesome.

After another mission with Toge — who should have been explored further in the film — we learn the intentions of Geto which is to remove all non-sorcerers from the world. He even tries to recruit Yuta — to which he willingly disagrees — and Geto declares war.

All the Jujutsu Sorcerers are deployed — besides Maki and Yuta who must stay at the high school — and engage in an epic battle against the curses created by Geto, whose true intention was to leave Yuta alone so he could take Rika away from him. Panda and Toge are sent back to the high school, but they are no match for Geto, even with Maki’s help.

Once Yuta realizes that Geto has pummeled his friends, a new rage encompasses him and he is set on destroying Geto with Rika’s help. He goes as far as to promise himself as a sacrifice to Rika as long as she helps him, which would mean the two are finally able to be together forever.

The fight between Yuta and Geto is by far the best fight sequence of the film, as the animation that goes into the fight along with the high intensity action makes it so it’s impossible to look away. The storytelling of how much Yuta has grown with controlling the curse and even grown as a fighter is perfect in the scene.

After the battle, Rika is free from the curse — it is discovered that Yuta cursed Rika — and can finally go to the afterlife. It is a very emotional scene as Yuta stays behind to live his new life, and I really liked the touching moment they shared.

I thoroughly enjoyed this movie and am excited to see where “Jujutsu Kaisen” goes next. There is much anticipation for season two of the anime, and I hope to see Yuta appear once again.