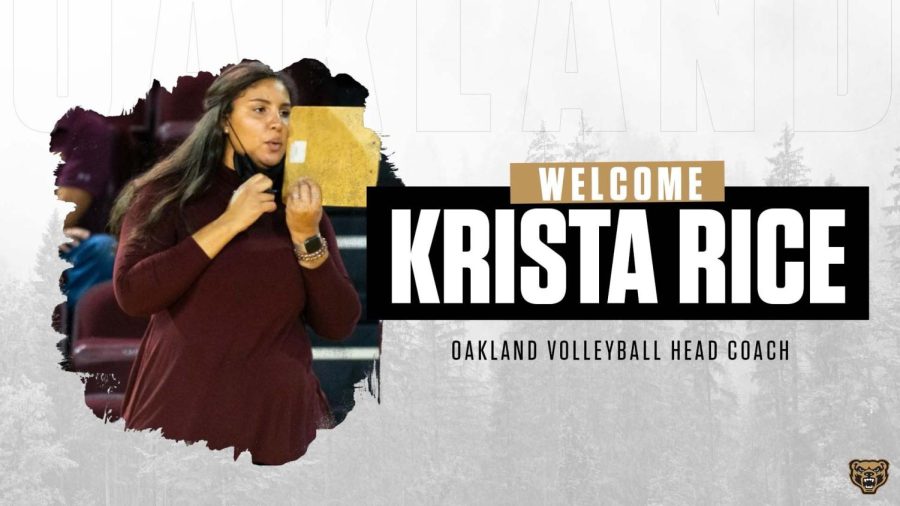 Krista Rice has been named the new head volleyball coach at Oakland University.

On March 16, Athletic Director Steve Waterfield announced the hiring of Krista Rice to be Oakland University’s next volleyball coach.

Waterfield delivered a statement shortly after the hiring, welcoming Rice to the Oakland family.

“I am happy to welcome Krista, Bruce, and their sons Lennox and Spencer to the Golden Grizzlies athletics family,” Waterfield said in a press release. “Throughout the search process, I was very impressed with Krista’s championship vision for OU Volleyball,  her coaching philosophy, and her emphasis on creating sustained excellence on the court, in the classroom, and in life.”

Rice has noteworthy experience at the Division I level, with stops at Toledo, Central Michigan and Michigan State.

Rice was a part of two NCAA Tournament runs with the Spartans in 2012-2014, and commended one of her mentors.

“I think every stop that I’ve had has sort of, in different ways, prepared me for this stage in my career,” said Rice. “I was fortunate enough to work under Cathy George, who is the coach at Michigan State, for what, 18 seasons? 18 years? So she was a tremendous — and still is — a wonderful mentor of mine.”

Rice spoke to the challenges of coaching, stating that the job isn’t a seasonal one.

“Many coaches receive the question, ‘oh well, what do you do the rest of the year?’ And I think navigating how much of a commitment it is, because it is a career,” Rice said. “If you’re not in the gym, you’re spending most of your time, really, in the office preparing, whether it’s for recruiting, or camps, or training for your team.”

As it relates to the team’s culture, Rice hopes to implement different things she has learned from other coaches to ultimately build her own team.

“Our vision, or my dream for the program, I think that we have a lot of the pieces that are, I guess, in place to be able to find consistent success again within the program,” Rice said. “I think that any program goes through highs and lows, especially in mid-major volleyball, where you’re typically competing in leagues where it’s extremely competitive.”

The volleyball season won’t kick off until late August, but Rice has already been working with the team for a week and is determined to have her team ready to compete in the fall.

“Our championship segment of our year is in the fall,” said Rice. “I actually just found out the other day that we report on Aug. 8 for all of our training, and our nonconference competition begins that final week of August.”

Rice not only is committed to coaching her players in volleyball, but also in life.

“I am a firm believer that my job isn’t just done once I walk off the court,” Rice said. “Being a coach at the collegiate level is so much more than that. Like I want to make sure that not only am I helping them find success in the classroom as students, and on the court as athletes, but really helping them develop as individuals and young women.”