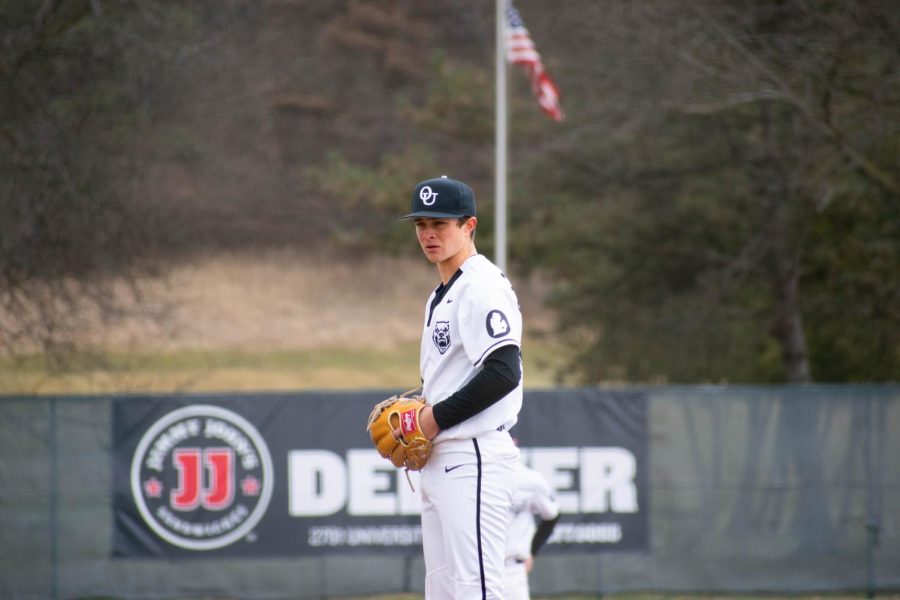 Aleksei Goldhill get the signs from the catcher and prepares his wind-up against Purdue-Fort Wayne on March 25.

The Oakland baseball team won its home series against Purdue Fort Wayne this weekend. Despite dropping the opening game of the series, Oakland fought back to claim the series victory.

The Golden Grizzlies are now 9-12 overall and 4-2 in the Horizon League.

The opening game of the series did not go the way Oakland would have hoped. The Mastodons scored three runs in the first two innings to establish a 3-0 lead through two innings.

However, the Golden Grizzlies couldn’t bring any other runs across, and fell to the Mastodons, 10-2.

The second game of the series went much better for the Golden Grizzlies. Right-handed pitcher Brett Hagen threw a complete game, leading Oakland to a coincidental 10-2 victory.

Oakland scored at least one run in each of the first five innings en route to a victory over the Mastodons. Lux registered three hits, and Green and Ian Cleary each had multiple hits to lead the Golden Grizzlies to victory.

Despite scoring 10 runs, Oakland only recorded six RBIs in the game due to some poor pitching from the Mastodons. The Golden Grizzlies scored three of their 10 runs on wild pitches.

Head Coach Jordon Banfield spoke to the challenges of scoring on wild pitches.

“Wild pitches are tough,” Banfield said. “Because you’ve got the one that goes to the backstop, and then you’ve got the ones that are right in front of the catcher, that we’re probably more aggressive than most on.”

Goulet led the team with two RBIs, and Post, Cleary, Seth Tucker and Michael Stygles each added one in the victory.

The series finale was moved to West Bloomfield High School, but that didn’t seem to affect Oakland. The Golden Grizzlies battled back and forth with the Mastodons, but ultimately prevailed, 10-9.

Cleary then launched a three-run home run to give Oakland a five-run lead in the bottom of the first inning.

The Mastodons then struck back with six straight runs over the next six innings. A Purdue Fort Wayne three-run home run gave the Mastodons a one-run lead in the seventh inning.

However, the Golden Grizzlies didn’t falter. Oakland added three runs in the bottom of the seventh inning to regain the lead.

Purdue Fort Wayne stole the lead back in the top of the ninth inning, and looked like it would steal the game from Oakland. However, Jared Miller scored on a wild pitch, sending the game to extra innings.

Nigh finished the Mastodons off in the bottom of the 10th inning with a walk-off home run.

“[Nigh] is doing an unbelievable job for a true freshman,” Banfield said. “He’s the youngest guy on our team; he just turned 18; he’s going to be a special one.”

The Golden Grizzlies now sit at 4-2 in Horizon League play, and Banfield likes where his team is at right now.

“I think [that win] puts us in first as of now, so that’s a good place to be,” Banfield said. “We want to do whatever we can to stay up there.”

Not all Horizon League teams have played the same number of games, but the Golden Grizzlies claimed their fourth league victory on Saturday afternoon, which is currently the most in the league.

Oakland will host Aquinas College on Tuesday before heading to Ann Arbor to take on Michigan in a one-game series.

Banfield praised Michigan and Head Coach Erik Bakich and thinks that the matchup will be beneficial for his team.

“I think [playing Michigan] will be a good example for our guys to see up close and personal what that looks like,” said Banfield. “That being said, we’re not going there to lose.”