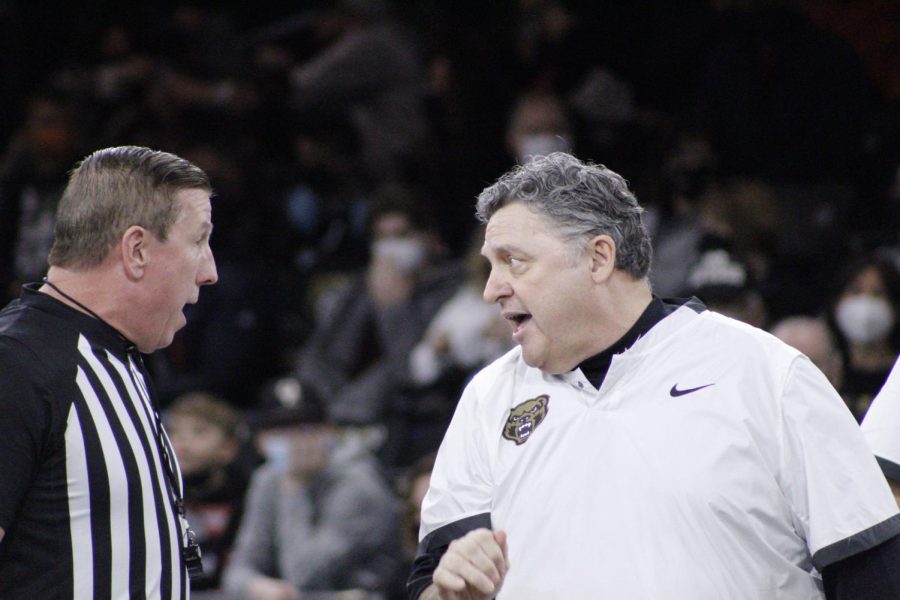 Oakland men's basketball coach Greg Kampe has some work to do this offseason.

The Oakland University men’s basketball team’s season ended in the Horizon League tournament quarterfinals on March 3, leaving a bit of a sour taste in their mouths.

“It’s always sad when it ends — facing those kids in the locker room,” Head Coach Greg Kampe said during #GrizzVision after that game. “Jamal [Cain] just gave hell of a speech to all the young kids. It was a really good speech for them to hear. He poured his heart out about it being over.”

At the end of January, the team was in first place in the Horizon League with a 9-1 record. Grad transfer Jamal Cain looked like the transfer portal steal of the year, and players like Jalen Moore, Trey Townsend and Blake Lampman were starting to come into their own.

But when the calendar turned to February, things started to roll downhill fast. It started with three straight road losses to Northern Kentucky, Wright State and Youngstown State to begin the month.

They would get back on track with a win at Robert Morris, then they would come back home for the final five games of the season, winning against arch rival Detroit Mercy on Feb. 13. Unfortunately, the team would suffer another three-game losing streak after this.

After losing a nationally televised game to Wright State in which the team led by 11 late in the second half, Oakland would lose to Northern Kentucky and Purdue-Fort Wayne as well, losing their chance at a first-round bye in the Horizon League tournament, having to settle for the 5-seed.

Turnovers and late-game collapses plagued the Golden Grizzlies during this stretch, with a conference play-high 23 giveaways coming against Northern Kentucky on Feb. 20.

Some late-season injuries seemed to catch up to Oakland as well. Moore played through some torn ligaments in his shooting wrist during the last 10 games, and both Townsend and Cain suffered ankle injuries that appeared to limit their ability.

Cain missed practice but would play in games, and Townsend tried to power through, even though Kampe was hesitant to play him. When taken into account, all of these factors appeared to lead to Oakland’s early exit in the Horizon League tournament.

It’s still early in the offseason, but so far things don’t appear to be as bleak as they seem. Moore recently announced that he would be returning to Oakland for his final year of eligibility, and the only big loss the team has had so far is Cain, who graduated and is likely going pro.

As of right now, a starting lineup of Moore, Osei Price, Micah Parrish, Townsend and Will Shepherd or Chris Conway doesn’t look all that bad. Kampe could easily add a piece or two through the transfer portal as well.

Lampman emerged as a solid option as a 3-point shooter off the bench, but it became clear as the season went on that the Golden Grizzlies could use some more depth. Whether that comes on the recruiting trail or through the portal remains to be seen.

The Post was unable to set up an interview with Kampe.