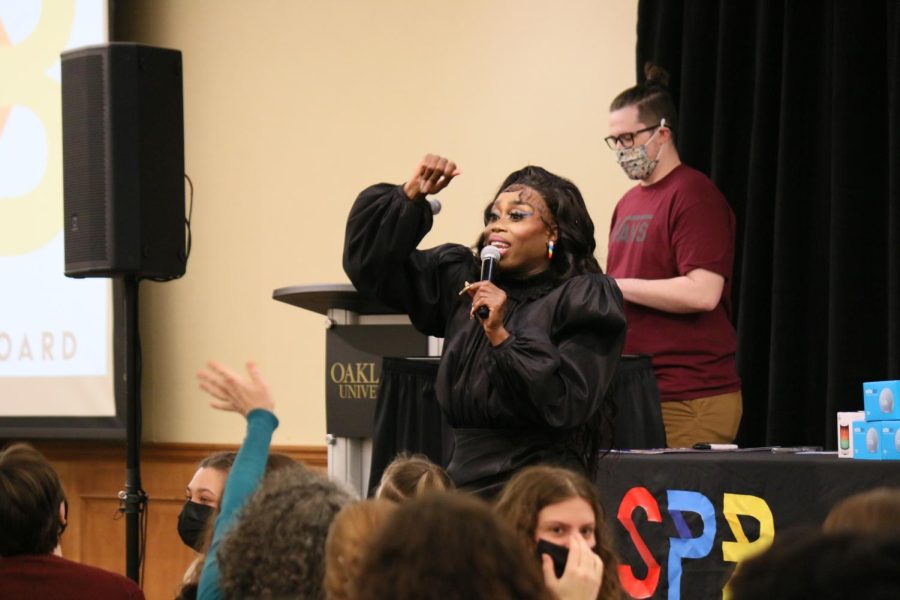 Representation on a college campus can do a lot for student’s self esteem and how welcome they feel at school. Having fun events such as drag queen bingo can be inviting for everyone.

On Tuesday, March 15, the student program board (SPB) at Oakland University put on drag queen bingo featuring Monique Heart in the Banquet Rooms in the Oakland Center (OC) from 7:00 to 8:00 p.m.

“One of the things the Student Program Board really tries to do, and it’s pretty difficult actually, [is] we really want to try to hit a diverse group of students,” President of SPB Joshua Robinson said. “So we really aim to hit not just one specific, niche group of students — we try to really expand out.”

SPB likes to collaborate with groups such as the Gender and Sexuality Center (GSC) and the Gay Straight Aliiance (GSA) on OU’s campus. This event helped recognize the LGBTQ+ with a fun, on-campus experience.

Heart has accomplished so much since her first appearance on the show, and has since started a podcast called “Ace of Hearts with Monique Heart.” Additionally, she’s been in multiple web series and starred in “Manic Moments with Monique Heart” and released her debut single in 2019, “Brown Cow Stunning.”

To decide which drag queen to invite to the event, SPB took a poll amongst their group. SPB used a middle agent to connect with her and ensure her appearance at OU.

“We really just trust the people who are into this kind of stuff and enjoy “RuPaul’s Drag Show” and enjoy drag in general,” Robinson said.

The event had a huge turnout with over 200 students in attendance. The banquet rooms in the OC were full of OU students playing bingo and having a good time.

“There were a lot of students we don’t typically see at SPB events, which meant a lot to me,” Robinson said. “We’re really trying to hit the mass majority of students at OU — not having a repeat of people at each event and having a large turnout of new people is going to expose them [to our events]. They’re kind of getting their benefit from the Student Program Board.”

The bingo winners at the event had chances to win prizes such as Amazon Alexa speakers and signed Monique Heart posters.

While this was the first drag queen bingo event, there is always the drag show put on by GSA, which SPB will sometimes sponsor. This event was a big hit and next year, when the events are planned, the excitingly high turnout for this event play a factor.