Men’s basketball plan for the next season: pass the basketball 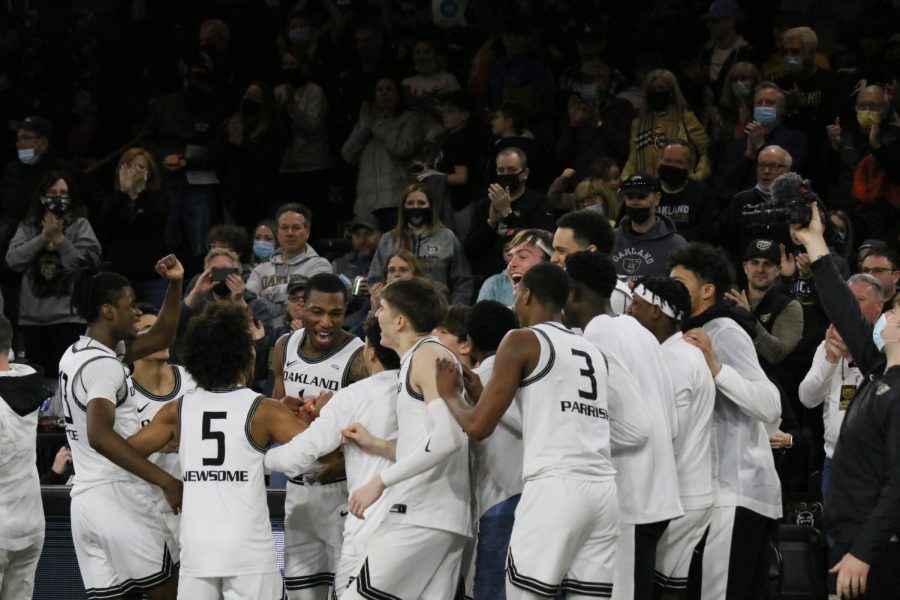 Sports reporter Reece Taylor has a plan for the Oakland men's basketball team to succeed in the Horizon League next season.

The Oakland University Golden Grizzlies Men’s basketball season started off as one of the most promising since 2017. Led by Head Coach Greg Kampe, Oakland was 13-4, had grind-it-out wins over top-seeded Horizon League teams, and had a statement win over Oklahoma State, a Power 5 conference team. Oakland established that it was a threat, and every team was on notice.

Unfortunately, when teams notice you, they also study you. Due to Oakland’s length and athleticism, they were unbeatable on the open court. The Golden Grizzlies forced a ton of turnovers and won in the open court. For weeks, Oakland would defend the perimeter and force smaller opponents into bad passes, cherry-pick, and score in the paint.

Oakland also had a major weakness: Passing. Oakland averaged double digits in both assists and turnovers, but defended well enough to hide their weaknesses, unfortunately teams began to notice, and responded by slowing the game down and forcing Oakland into a half-court team.

After a string of strong performances, Northern Kentucky was the first team to exploit this weakness on Feb. 4,  forcing 17 turnovers to beat Oakland and committed only nine themselves. This performance provided a blueprint for the Horizon League to contain the Golden Grizzlies, and did so for the remainder of the season.

For instance, in the last five games of the Oakland men’s basketball season, only two of them featured more assists than turnovers, including a 23 turnover performance against the same Northern Kentucky team on Feb. 20 In these games, Oakland also went 2-3 including a three-game home losing streak.

Simply, Oakland MUST learn to pass the ball. In transition, it was a “pass it to the open man” or “closest to the basket” offense. When forced to play against a 2-3 zone defense, players would try to drive and ended up getting stripped or would attempt a three-point shot, which Oakland was third  worst in the Horizon League. Because of Oakland’s desire to run and subpar three-point shooting, they were quickly figured out by opponents.

Going into next season, Coach Kampe must make consistent shooting and half-court a priority. This is not to say that Oakland shouldn’t play their transition game, but to have multiple dimensions. If there are no surprises on the court, teams will know your game plan, and Oakland was exposed. Oakland will need to know that the best way to win in the half court is to share the ball and open up the floor, and combined with improved perimeter scoring, Oakland won’t be trapped into a singular game plan.

Since joining the Horizon League in 2013, Oakland Men’s Basketball has only one regular-season championship, that being the 2017 season. Oakland has one of the most talented rosters they’ve seen in years, but cannot afford to fall into old patterns. If Oakland wants to climb back into the elite of the Horizon League, they must learn to make adjustments again before the league figures them out.